Verdict: False. The young boy pictured with Nkrumah is 13-year-old George Miller who was at the time, the youngest student enrolled for the summer session at Columbia University.

An old photo purportedly showing Ghana’s first president, Kwame Nkrumah and incumbent president, Nana Akufo-Addo, together from many years ago is once again going viral on social media.

A Facebook user, John Kwadwo Stevens, recently shared the photo with the caption, “Dr. Kwame Nkrumah awarded young Akufo Addo with a book and Cash prize for excelling in a debate competition!”

It has since been shared more than 140 times.

The last time this photo went viral was in 2016 when President Akufo-Addo was campaigning to be president. A number of comments at the time flagged the photo as false even though it still continues to be believed by many to be the photograph of Nana Akufo-Addo.

Given that the photo’s purchasing license is owned by GettyImages, we accessed the photo on GettyImages’ website to get further details.

Per the caption on the photo, the photo was taken at Moorseville, North Carolina in the US in 1960.

Beyond that detail, Getty Images did not state the identity of the little boy.

Nana Akufo-Addo, born in 1944, was 16 years old in 1960 and according to many biographies, was in Lancing College in the UK around that time.

A photo shared by the school and published on some Ghanaian news portals in 2018 including My News GH shows Akufo-Addo as a student there in 1960.

With the photo taken in the US while Nana Akufo-Addo was schooling in the UK, it was unlikely that he was the one in the photo.

After a series of advanced Google searches based on keywords from the caption shared by GettyImages, we found more information on the said young boy in the August 21, 1958 issue of Jet magazine hosted on Google Books.

Page 24 of the magazine captures a story of a young boy who was scheduled to meet Kwame Nkrumah.

The boy was named as 13-year-old George Miller who was the “youngest student enrolled in summer school at Columbia University in New York.”

He was “invited by Ghana’s Premier, Kwame Nkrumah, to attend the Republic’s second-anniversary fete March 6.”

The photo accompanying the publication had some remarkable resemblance with the youngster who featured with Kwame Nkrumah in the iconic photo.

These include the glasses and his ears. Considering both images, it is very convincing that that youngster in the photo with Kwame Nkrumah was George Miller and not President Nana Akufo-Addo.

Besides this point, George Miller was from the same town in which the photo with Kwame Nkrumah was taken–Moorseville, North Carolina. 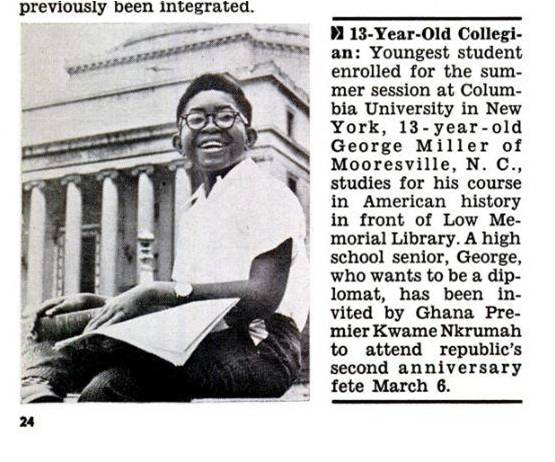 Based on the evidence presented above, we conclude that the boy who featured in the photo with Kwame Nkrumah was not Nana Akufo-Addo but very likely to be 13-year-old George Miller of Moorseville, North Carolina.

The reporter, Jonas Nyabor, produced this fact-check under the auspices of the Dubawa 2020 Fellowship in partnership with Citinewsroom to facilitate the ethos of “truth” in journalism and to enhance media literacy in the country.

‘Her legacy will be celebrated by generations’

Counselor Lutterodt apologises to Ghanaians and raped victims for his infamous...