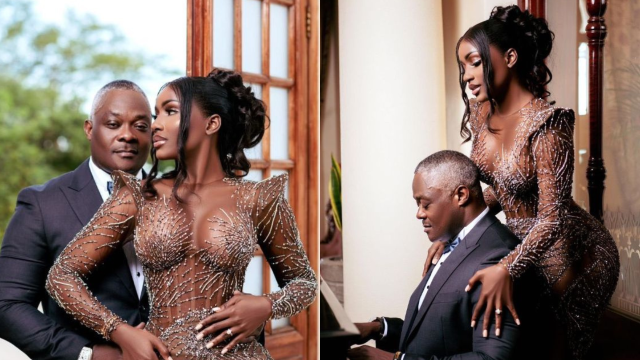 According to the social media star, she married her sweetheart last year, but decided to keep it a secret from the internet for personal reasons.

Sharing some of their breathtaking pictures on social media earlier yesterday, Mya Jesus revealed for the very first time that she said yes to her hubby just a month after knowing themselves a few days into their dating journey, which won’t be more than 10 days if my guess is right.

Mya Jesus described her husband as a handsome God-fearing man who’s the best thing that has ever happened to her.

What has sparked outrage on social media isn’t their huge age difference alone but Mya agreeing to marry the man just a few days into their dating journey.

Social media users claim she decided to marry the man because of his wealth and not love because no discerning person will agree to marry a person he/she just met a few days ago without having any ulterior motives.

Magnificent buildings in Brazil are pockmarked by rioting – amid fears the unrest may...

Afrochella EXPOSED – Organisers Allegedly Abandoned Young Lady Who Died After Explosion At The...