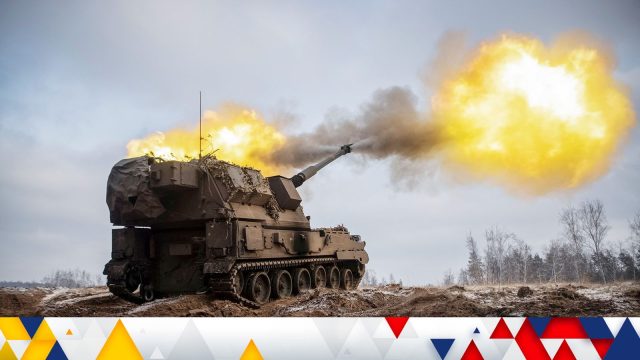 This is the most significant American package of weaponry to Ukraine since the Russians invaded.

The numbers are staggering – financially and in terms of the pieces of military hardware that the Americans are giving away.

The cost is some $2.5bn (£2bn). It includes 59 Bradley Infantry Fighting Vehicles, 90 Stryker Armoured Fighting Vehicles and 350 Humvees – the large 4×4 vehicle and an icon of the US Army. There are also over 21,000 artillery rounds of different types and much more beyond.

Missing from the list though – tanks. This is what the Ukrainian military say they so desperately need if they are to defeat the Russians and not just hold the frontlines.

Why won’t the Americans supply their main battle tank, the M1 Abrams? Well, ostensibly it’s because of supply chain and maintenance issues. It’s true that it’s 10 or so tonnes heavier than European equivalents and geography makes its deployment and maintenance that much harder.

But there are lingering American concerns over provoking Vladimir Putin too much – where, policymakers in Washington ask, are his red lines?

There is confusion and frustration among military sources I have spoken to over why the Biden administration can’t just hand over a few tanks to unlock the German impasse and to up the Ukrainian numbers if only by a handful.

The criticism is that the Americans are consistently providing only enough weapons to sustain the war, but not enough to bring it to an end with a Ukrainian victory.

Do some American policymakers see a strategic opportunity in prolonging the war to grind down the Russian military and Mr Putin himself?

One other related development – the CIA director was in Kyiv over the past few days meeting the Ukrainian leadership.

Beyond tanks, the discussion would have focussed on what Mr Putin has planned for the weeks and months ahead.

Remember, a year ago, American intelligence was spot on when the CIA warned repeatedly that Ukraine was about to be invaded. Many doubted Mr Putin would actually do it. But he did.

The suggestion is that a new Russian offensive is imminent.

That’s why the Ukrainians on the frontline say they need as many tanks as possible.

Ukraine’s leadership is worried about Western fatigue over Ukraine. From my perspective in Washington, it’s certainly true that there’s growing unease among Republican lawmakers on Capitol Hill with what they consider to be an unaudited and seemingly endless weapons flow to Ukraine.