Home Entertainment Are you the one to tell me what to do? – Quarme...
Facebook
Twitter
WhatsApp
Telegram

Ghanaian highlife musician, Quarme Zaggy is not happy about how Kumi Guitar described him in his new song titled ‘S3x’.

While mentioning some people who are not virgins in the song, Kumi stated that Quarme Zaggy is his best friend and he can whine his waist like a goat when he is having intercourse.

This line in the song has infuriated Quarme.

He believes it is a defamation of character—so he will sue the Zylofon Music artiste.

In a post sighted by Zionfelix.net, Quarme Zaggy said he doesn’t have the time to reply Kumi Guitar—but he should prepare to explain himself at the court.

He wrote on Twitter: “@Kwamedadziegh is he the one going to show me what to do?? @KumiGuitarGh Fuck you !! Is it me you gonna use to promote your song?? I don’t have no time to reply this nonsense in any song, when we get to court you go explain your fkn self… 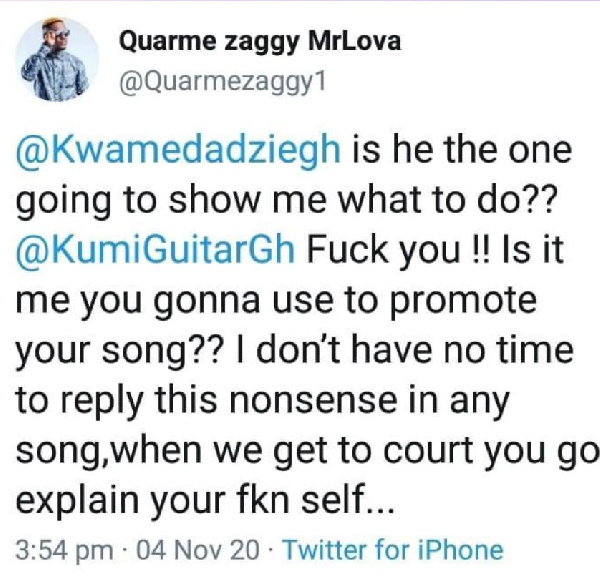