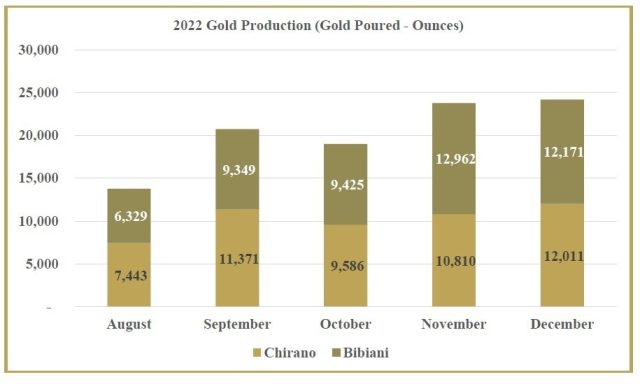 Asante Gold Corporation, a Canadian-based gold mining company, is forecasting a combined production of approximately 400,000 ounces of gold for 2023 from its Bibiani and Chirano mines.

This should result in some US$771.6million – pegged at US$1,929.02 per ounce as of January 19, 2023 world market prices. Asante’s recent increase in gold production is a positive sign for the company’s future, particularly its focus on exploration and expanding its mining operations.

In an update to investors, Asante noted a significant increase in gold production for the months of November and December 2022 – with an average monthly production increase of 20.7 percent from its Bibiani and Chirano gold mines in Ghana compared to the prior two months.

This, Asante said, represents a significant achievement; as it has only recently transitioned from an early-stage exploration company to a mid-tier gold producer.

Dave Anthony, President and Chief Executive Officer of Asante Gold Corporation, stated that the significant production gains in November and December are a positive sign for the company’s future.

He said: “The significant production gains in November and December bode well for the achievement of our 400,000 ounce target from Bibiani and Chirano for the fiscal year ending January 31, 2024. Over the past five months, we have made payments totalling US$83.6million toward closing our Bibiani acquisition and repaying our gold forward sale agreement. Looking forward, we continue to capture the benefits of owning these two nearby operating mines – which incorporate a district-scale land package with significant exploration potential”.

Asante’s Bibiani gold mine and Chirano gold mine are both operating at full capacity, with the Bibiani process plant and mine facilities running on a 24-hour-per-day basis. The company reported that 230,000 tonnes of ore was treated in November and December, which was 18 percent ahead of the ramp-up schedule. Asante plans to increase throughput to 250,000 tonnes of ore per month by the end of March 2023.

The company also reported that preliminary gold production in December was 12,171 ounces, with 86.3 percent recovery from 1.70 grammes per tonne (g/t) average gold grade feeding the mill. As the mine development continues into Q3-2023, the process plant feed grade is planned to be approximately 3g/t.

It also completed a dedicated power supply line in December, which will support initiatives to improve operating results going forward.

Asante’s near-mine exploration programme is also continuing, and the company is working to extend the Bibiani Open Pit life of mine from 8.3 years. Exploration continues to focus on four targets: Aheman, Elizabeth, Grasshopper and South Russel.

Total drilling completed in calendar year 2022 exceeded 24,000 metres – slightly ahead of the plan, which was 23,900 metres. The Company plans to continue its near-mine development exploration programme in calendar years 2023 and 2024, with planned drilling of 30,000 metres per year.

Who wins 2022 SWAG Male Athlete of the Year? An open contest for Benjamin...