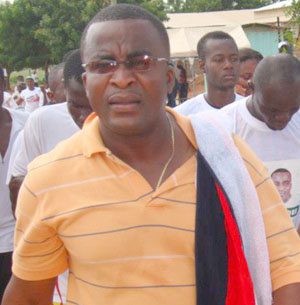 Mr Emmanuel Nii Ashie Moore, the Greater Accra Regional Chairman of the National Democratic Congress (NDC), has donated GHC 50,000 towards the payment of rent arrears of the party’s Regional Office at South La, in Accra.

The donation, which he said was from his personal resources, was a contribution to defray the legacy debt of the office rent amounting to US$38,000.

“As we speak, I have donated an amount of GHS50,000 towards the settlement of part of the rent arrears of our regional office,” Nii Ashie Moore told journalists during an interview in Accra.

The donation came days after Speaker of Parliament Alban Bagbin had donated GHS100,000 for defraying part of the rent arrears.

“We recently received similar support from the Speaker of Parliament who happened to be one of our Fathers of our Party, the Great NDC,” Nii Ashie Moore said.

He gave an assurance to lead in building a regional party office during his four-year term as Regional Chairman.
He said: “I’m assuring our party supporters that by the end of my four-year mandate as Regional Chairman, we should have our own office, built for our activities. We cannot keep on spending this huge sum of money renting. So, by 2024-2025, we should start something for our office.

“Even if I don’t complete it before my mandate ends, at least, there will be a building site for that purpose.”
According to NDC Greater Accra Regional Chairman, plans were far advanced to put up a permanent Regional NDC office to avoid the future occurrence of such rent arrears.

He expressed his commitment to ensuring that the party has a place conducive for meetings to prepare for the 2024 general election.

Portions of Sekondi-Takoradi roads taken over by heaps of sand