Ghanaian actress, Beverly Afaglo has condemned actresses and actors who have publicly endorsed the New Patriotic Party’s Lydia Alhassan instead of the National Democratic Congress John Dumelo who happens to be an actor.

According to her, it is expected for persons in the movie industry to at least support their member, John Dumelo, who is vying for a parliamentary position.

However, she claimed some industry players have thrown their weight behind his (Dumelo’s) contender, the incumbent Member of Parliament for the Ayawaso West Wuogon Constituency, Lydia Ahassan, all in the name of money.

In a post sighted by www.ghanaweb.com, the actress described the move as a “dishonour to a colleague’s name and hardwork”; something Beverly said she could never do in her profession.

“How will I be able to disregard my profession and allow politics to make a ridicule of my profession? E go hard. Thank God am not in that corner but we should all remember that after 7th Dec life still goes on,” parts of her Instagram story post read.

Her comment has attracted diverse reactions as many have argued that, her colleagues have the sole responsibility of supporting any political candidate of their choice.

Her comment comes after the likes of Kalybos, General Ntetia, Cwesi Oteng, Prince David Osei, Bismark the Joke, Bibi Bright have publicly declared their support for Lydia Alhassan and the NPP.

On Monday, December 7, 2020, Ghanaians will be going to the polls to elect a new president as well as parliamentarians to govern the affairs of the country for the next four years. 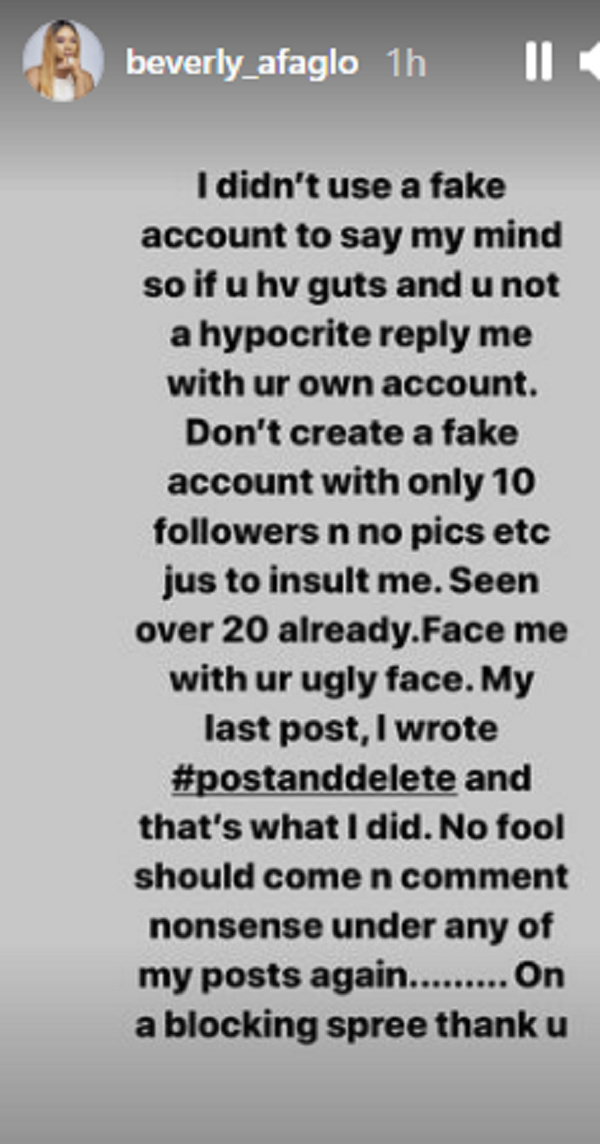 Funny has been cursed by his ex and will go mad...

Adu Safowaa is a witch & has a mental problem -Godfather

Joe Mettle hints on how one can stay relevant in their...

Afari Gyan fires out to Mahama & NDC Lawyers at Supreme...