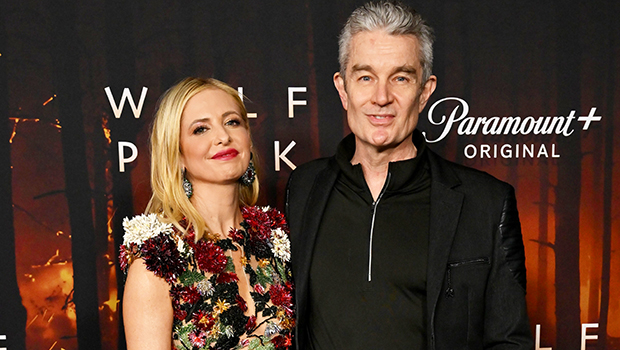 Buffy and Spike will always be friends over foes! Buffy the Vampire Slayer stars Sarah Michelle Gellar, 45, and James Marsters, 60, reunited on January 19 at the red carpet premiere for Sarah’s new Paramount+ series, Wolf Pack. The former co-stars and old pals posed together on the carpet which sent Buffy fans into a frenzy! After all, it’s been almost 20 years since these two shared the screen together in the beloved supernatural series.

Sarah looked gorgeous on the carpet in a floral mini dress and matching earrings. She let her long blonde hair down and also rocked pink lipstick. Meanwhile, James went with an all-black outfit that included a jacket, a zip-up shirt, and a pair of jeans. The Buffy alums had giant smiles on their faces as they posed for photos together. Sarah also took a few snapshots with her husband Freddie Prinze Jr., 46.

Sarah and James’ reunion comes after she reflected on Buffy in a recent interview with The Hollywood Reporter. The actress revealed that she watched the series with her two children during the pandemic, but she “had trouble” getting through the Buffy and Spike-centric season 6, which deals with a lot of heavy topics like sexual aggression. “It wasn’t appropriate for them at the time, and I just don’t want to rewatch it,” she admitted.

Sarah also opened up in the THR interview about Buffy‘s legacy which has been affected by abuse allegations against the show’s creator Joss Whedon. Sarah’s co-star Charisma Carpenter, 52, previously accused Joss, 58, of being “cruel,” on the set of the TV show. Sarah’s shown support for Charisma but she told THR that she hopes the show’s “legacy hasn’t changed” because of Joss.

Hitman 3 Getting Rebranded as World of Assassination, Will Fuse Entire Trilogy Into One...

50 Cent Says Eminem Turned Down on $9 million Collaboration To Perform At The...