A man said to be a notorious cable thief has been grabbed at Pershie, a suburb of Elmina in the Komenda Edina Eguafo Abram District of the Central Region.

Information gathered indicated that the suspect attempted to steal the cables belonging to MTN at their cell site but luck eluded him and was arrested by the residents who tied him on a light pole and nearly lynched him.

The suspect who gave his name as Joe Mensah is noted to be a serial cable thief who has been stealing from various MTN cell sites within Elmina and its environment. 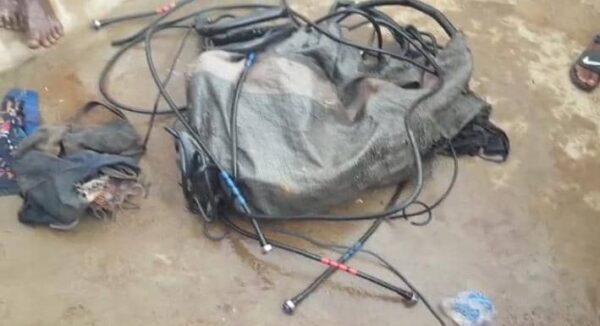 He’s even said to have cut cables belonging to some of the radio stations in Elmina and has been on the police wanted list.

In an interview, the suspect said he decided to cut the cables in order to sell and get money to fend for himself. He appealed to the residents to forgive him and allow him to go promising that he’ll steal no more.

But his plea fell on deaf ears as this was not the first time he had stolen. They subjected him to severe beating before calling in the police.

The suspect is currently in the custody of Elmina Police assisting in an investigation.

Click Here To Read Our Top Stories For Today

Gabby and Bawumia displaying signs of PTSD, ignore them.

“Just Imagine Wetin Go Happen If I Spend 1 Month With...

Sudan arrive in Ghana ahead of AFCON qualifier – Ghana Sports...

Dr. Kofi Abban pledges $300 reward to each Kotoko player to...