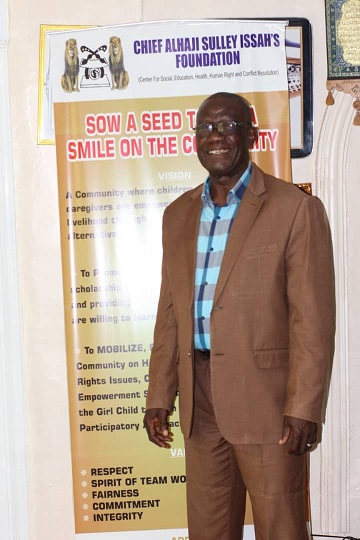 The Chief Alhaji Sulley Issah Foundation, a non-profit organisation has embarked on series of outreach programmes to alleviate poverty, protect children and reduce drug abuse in various communities across the country.

Since its inception two years ago, the foundation has provided different forms of relief to orphanages by providing them with consumables, counseling services and sanitary products as often as possible.

Also, the activities of the organisation geared towards the total elimination of drug abuse among the public, especially the youth, have seen some results as many drug selling points in some communities within the Abeka-Lapaz area in Accra have been shut down.

In an interview with the Founder of the foundation, Chief Alhaji Sulley Issah recently, he explained that drug abuse contributed to the high rate of criminal activities in the country, saying if the menace is not well tackled, many innocent children would also be tricked into doing drugs.

He said if every community leader makes it a point to ensure no group of people assembly at particular spots, popularly known as ghettos, to sell and smoke or sniff drugs, gradually, the dangerous habit and practice would become a thing of the past.

Alhaji Issah, who is also the Moshie Chief for Abeka-Lapaz said “I am going to continue to use my foundation to bring hope and sanity to my community and the country at large.

Every little effort to save the youth going wayward should not be considered insignificant because little drops of water makes a mighty ocean. I personally, with the help of a taskforce I formed, managed to close down a popular ghetto in my jurisdiction. I cannot be the chief here while there is a ghetto operating in the same place I find myself.

I just cannot look on for such a thing to happen, that is why I took drastic measures to ensure such places are closed down. If every chief does this and ensures there are no ghettos in their various jurisdictions, I believe this drug abuse situation will be salvaged.”

Touching on the need for the education of children to be a priority for parents, the chief stressed that children are assets to every nation so any endeavour that would add value to their lives must not be taken for granted.

He advised Muslims who do not have the financial capability of marrying more than one wife and giving birth to children they could not take care of properly, to desist from the practice, saying it is against the teachings of Islam.

“Marriage is not a competition so do not put yourselves in situations where you will be found wanting,” he advised.

The Alhaji Sulley Issah Foundation also focuses on women empowerment, conflict resolution, provision of support to poor families, provision of funds to support the education of children, human rights protection, sensitisation of communities on health-related issues, and the promotion of peaceful coexistence among the citizenry.

“I Would Love For You To Squeeze My Head With Your...

I feel ashamed for Kalybos, others campaigning for Lydia Alhassan after...

Mercy Johnson’s Baby, Divine Shocks Fans As She Speaks For The...

My ex-husband’s bipolar disorder led to my divorce at age 27-...

Locks to the Office of Daniel Domelevo changed while he is...

Man shot dead on a farm in Atwima Kwanwoma district

How Michael Essien almost ended his football career before it started

I Will Release A Video For Every Song On The Lighthouse...

Walter Rodney Recognized by the Guyana Government After 41 Years