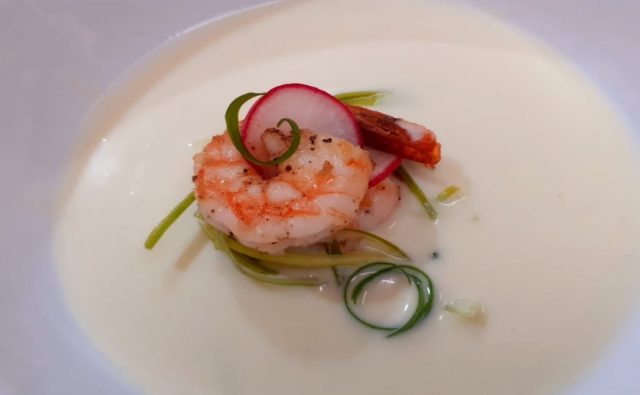 Chilled leek and potato soup, also known as Vichyssoise, is a classic French cream soup of velvety-rich potatoes with sharp, green alliums made soft and mellow by chilled cream. It can serve as an ultimate elegant appetiser for a summertime dinner party.

The famous dish is traditionally served chilled during warm weather, similar to gazpacho, but also lends itself to a warm preparation during colder months.

Variations on the standard potato and leek formula for vichyssoise may include other alliums like shallots or green garlic, root vegetables like parsnips, or seasonal ingredients like fresh peas or cauliflower. In its preparations, the unifying features are cream and the chilling of the finished puree. The thick, cold soup remarkably manages to be salty and thirst quenching at the same time. Contrary to its presumed Frenchness, the soup is completely American.

Garnish with some shrimps and fennel salad as it pairs well with the soup.

{Divide the quantity into 4}

Lakeside Estate refurbishes Katamansu Primary and JHS for Quality Education as part of its...