The Diaspora African Forum (DAF) has honoured the late Chadwick Boseman by etching his name on the historical Sankofa Memorial Wall.

The Black Panther hero adds to the list of historical figures of African descent in the diaspora who have made a significant impact in the Black community and, therefore, deserving of the honour.

At a memorial ceremony, which was held in partnership with the Diaspora Coalition on Thursday, 17 September 2020 at the DAF premises located behind the WEB DuBois Centre in Accra, the Head of Mission at DAF, Ambassador Erieka Bennett said they were celebrating Boseman because he made a difference when he was alive.

“We just want to send our condolences from Africa to the rest of the world”.

“Chadwick’s role as Black Panther delighted children and adults around the world. He played T‘Challa, a super hero and leader of Wakanda. May his soul rest in perfect peace,” she said.

Ghana’s Minister of Tourism, Arts and Culture, whose speech was delivered by her Deputy, Ziblim Iddi, said Chadwick’s life on earth was “extraordinarily watered by his gentleness of soul and brilliance, both on set and in real life,” adding that through his work, he managed to light a torch for people of African descent, for Africa the ancestral home, and for the African American struggle.

“… Chadwick was not just an artiste or an actor but he was active in redefining everything black,” she said.

The Youth Ambassador for Diaspora Affairs at the office of Ghana’s Presidency, Mr Jake Obeng-Bediako, said, “the life of Boseman, albeit short, had inspired and will continue to inspire many a youth of African descent to work together to see the fictional Wakanda brought to real life.” 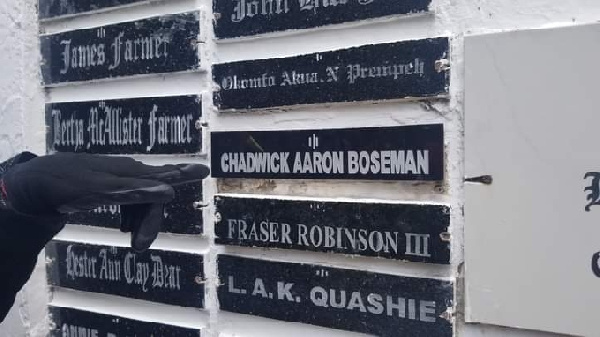 Boseman was best known for his role as T’Challa the Black Panther, in a Marvel Studio film.