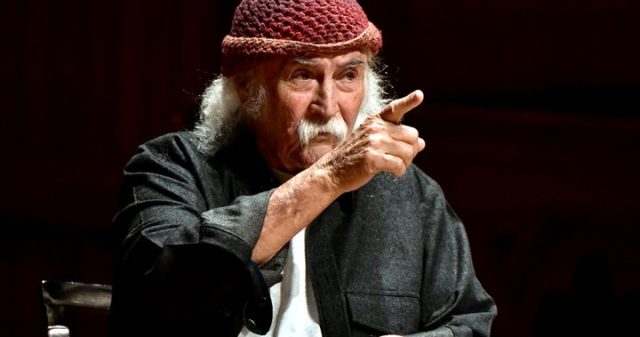 David Crosby, the legendary singer-songwriter who founded some of the defining rock groups of the 1960s, has died at the age of 81, according to media reports on Thursday.

Variety shared a statement from Crosby’s wife saying the musician died after “a long illness” and was surrounded by his family when he passed.

“Although he is no longer here with us, his humanity and kind soul will continue to guide and inspire us,” the statement reads. “His legacy will continue to live on through his legendary music.”

Born and raised in Los Angeles, Crosby was a founding member of The Byrds, a pivotal band of the 1960s that combined rock and folk music. He co-wrote some of their most notable songs including “Eight Miles High” and sang on their immensely popular covers of “Mr. Tambourine Man” and “Turn! Turn! Turn!”

After leaving the group, he formed Crosby, Stills & Nash with fellow superstars Graham Nash and Stephen Stills. The band further exploded in popularity after bringing Neil Young into the fold to become Crosby, Stills, Nash & Young. Both iterations were known for their delicate harmonies, songs like “Woodstock” and “Teach Your Children,” and inter-member clashes that led to multiple breakups and reunions over the ensuing decades.

“It is with a deep and profound sadness that I learned that my friend David Crosby has passed,” Nash wrote in a tribute on Instagram.

“I know people tend to focus on how volatile our relationship has been at times, but what has always mattered to David and me more than anything was the pure joy of the music we created together, the sound we discovered with one another, and the deep friendship we shared over all these many long years.”

Crosby was inducted into the Rock and Roll Hall of Fame twice for his work with The Byrds and Crosby, Stills & Nash, as well as the Songwriters Hall of Fame.

But he frequently admitted in later years that he squandered that acclaim and good will as he fell into drug addiction and drove collaborators and supporters away with an abrasive personality.

He said in the 2019 documentary David Crosby: Remember My Name that Nash, Stills and Young “really dislike me, strongly,” which stood in the way of any hopes of working together again.

Rolling Stone called Crosby “rock’s unlikeliest survivor.” His addictions, which led to arrests in the 1980s for drug possession, culminated in a liver transplant in 1994. He also suffered from hepatitis C and diabetes.

“I’m concerned that the time I’ve got here is so short, and I’m pissed at myself, deeply, for the 10 years — at least — of time that I wasted just getting smashed,” Crosby told the Los Angeles Times in July 2019. “I’m ashamed of that.”

He fell “as low as a human being can go,” Crosby told the Times.

Through it all, Crosby continued to make music. He released a slew of solo albums and collaborations with Nash while also working with Phil Collins — who paid for the liver transplant — and his own son James Richmond, who was a longtime band member and writing partner.

Crosby fathered five other children, including two as a sperm donor to rocker Melissa Etheridge’s partner.

He was also prolific on social media, continuing his outspoken support for environmental causes and disdain for politics.

His last tweets were sent on Wednesday expressing support for climate activist Greta Thunberg after she was arrested at a protest in Germany.

—With files from Reuters

Your Forehe*d Like Pickaxe – Netizens Rain Insults On Shatta Wale For Calling Ghanaians...