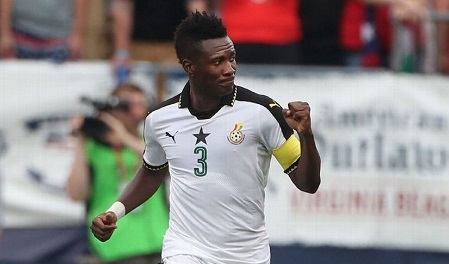 Addo, revered for his goal scoring prowess during his time with the Phobians praised Gyan, describing him as one of the ‘deadliest’ striker he has seen in the game.

Asamoah Gyan holds the record as Ghana’s leading scorer with 51 goals, and has since established himself in the folklore of Ghana football.

The ex-Hearts of Oak forward may not have achieved internationally as Gyan, however, he has full respect for the potent attacker.

“He is one of the deadliest strikers I have seen and a good chap,” Addo told Tv3 Sports. “For me he is the best Ghana football has ever seen trust me,” he added.

The ex-Sunderland forward has been inactive since picking up an injury whiles playing in the Indian Super League, but Gyan is not ready to hang his boots at 34.

Meanwhile, Ishamel Addo has retired from active football and is one of the greatest to have ever played on the local scene, winning the golden boot three times on a row.

[VIDEO] Did you watch Godfred Yeboah during his playing days with Kotoko? No? Click to watch him in action

How many Gods are you serving – Ghanaian prophets asked

‘Where Are Your Clout Mumu Girl’ -Laycon Fan Drags Erica And...

Celestine Donkor teams up with Efya, Akwaboah and Maa Cynthia on...

Zynnell Zuh to feed the street children on Christmas day

You’are a fool to think you are the Queen of Ghana...

There wasn’t any plan to sideline Agya Koo from Kumawood

Ex-Ghana U23 captain Yaw Yeboah scores for Wisla in Poland –...

28/07/2021
We use cookies to ensure that we give you the best experience on our website. If you continue to use this site we will assume that you are happy with it.Ok