US Presidential Candidate, Joe Biden, kneeling in front of a young boy

Social media was taken by surprise following a post by Don Little on his official Instagram page indicating that he met Mr. Biden during his trip to the USA.

He received praise from Ghanaians for putting the country on the map. In an Instagram post sighted by GhanaWeb, he caption the said photo: “I met US presidential candidate Joe Biden in the state.”

But, it appears that the boy who was captured with the US Democratic Presidential nominee is actually the son of the owner of Three Thirteen, an apparel store in Detroit, Michigan, USA.

Joe Biden on Wednesday, September 16, 2020, posted an image of him kneeling in front of a young boy on Instagram with the caption:

“Our children are a constant reminder of why I’m in this fight. We need to build an economy that gives them and their families a fair shot. We need to root out systemic racism so they grow up in a more just nation than we have now. We need to combat climate change so there’s a world left for them to thrive in. I believe in a better future for our children and will fight for them until the very end.” 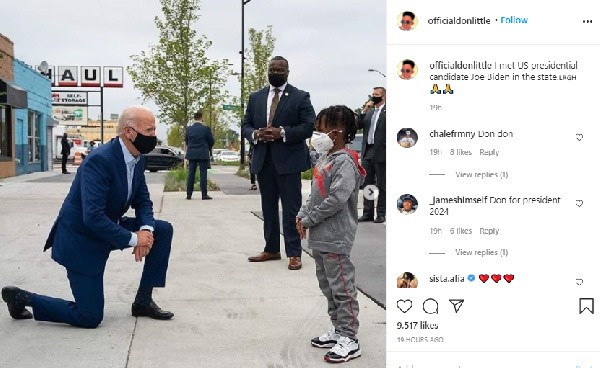 Democratic presidential nominee Joe Biden speaks to CJ Brown as he makes a brief stop at “Three Thirteen” clothing store to buy a few items for his grandchildren while visiting Detroit, Michigan. Photo by ?@LeahMillis? pic.twitter.com/hKVPZKIPFe