Television and radio presenter Afia Pokuaa popularly known as Vim Lady has berated the incessant threats on some media personnel who called the elections in favour of some parties, prior to the EC’s official declaration.

According to her, such attacks from politicians and their followers have grown to become a ritual in every election year.

In a Facebook post condemning such acts, she noted without mincing any words that it should not come as a surprise to Ghanaians if, in the coming days, a media person is maimed or killed in the name of elections.

“The way politicians are threatening media people, we should not be surprised if we wake up to news that a journalist has been KILLED or maimed in the coming weeks,” she wrote.

She further explained that media persons have no control over the outcome of elections; a fact which politicians are aware of yet overlook and mislead their followers into believing otherwise.

Afia Pokuaa wrote; “Both NDC and NPP know journalists have NO CONTROL over election results but only report what is COUNTED at the polling stations and collation centers in the presence of their PARTY AGENTS but they still lie to their followers that the media has stolen results.

“Why must journalists be the target of attack every election while those who contest sleep? This profession is not worth OUR LIVES…,” she concluded.

Afia Pokuaa’s comment follows the recent string of attacks launched on some media personalities shortly after the EC declared the official results of the presidential elections.

Meanwhile, a preliminary report by the European Union Election Observation Mission Ghana 2020 (EU EOM) has said the media – both state-owned and private – were polarised in their coverage of Ghana’s just-ended general elections. 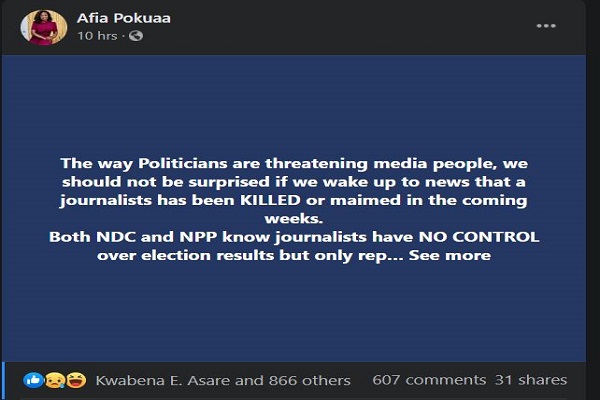 Get the news on Whatsapp. Click Here To Join Our Whatsapp Group

You are not funny – Augustin Dennis tells DKB

Introducing sex toys into the bedroom

I will have my wedding in an aeroplane – Lilwin