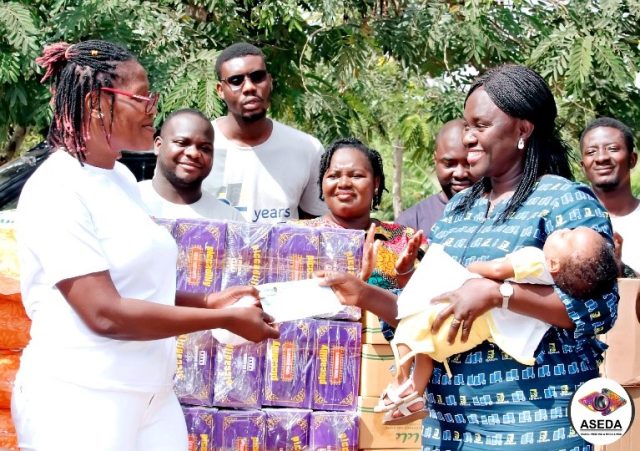 FBNBank ended 2022 on a high note with special festive activities, receipt of awards and brand sponsored events serving as the main highlights which filled their customers, clients and other stakeholders subsequently with much expectation and hope as they entered the new year, 2023.

For FBNBank, the month of December in particular was packed with exciting activities which was kicked-off by a Festival of Nine Lessons and Carols hosted by employees of the Bank, sponsorship of Pellafest, an Acapella festival and the hugely patronized “Samini Experience Festival II” which featured the Bank’s Product Ambassador and the visit to the Royal Seed Orphanage at Papaase. In the midst of the activities the Bank also received awards for its Commercial Banking and Small and Medium Enterprises Banking efforts. All together, these activities created a great feel for the FBNBank brand giving its variety of stakeholders a true sense of being placed at the heart of the Bank’s efforts.

The Festival of Nine Lessons and Carols, featured performances by employees including Frank Akuamoah, Anointed Virtue Music, Linda Goraseh and the very exciting Staff Choir, Angelic Voices of FBNBank, who gave excellent renditions of popular Christmas and Gospel songs. There was also Dulcet, a choral group that rendered melodious music and got the employees cheering. The Exhortation, which was delivered by the Head, Commercial Banking, William Amon Neequaye called on “FBNBank’s employees and Ghanaians as a whole not to lose sight of the lessons that Christmas taught. It wass a time to renew our commitment to serve our customers and clients in humility. It was a time to recharge our energies in order to be able to deliver on expectation in the new year.”

The Pellafest Christian Music Festival was organised by United Praise in partnership with FBNBank and it lived up to its billing. This purely praise, worship, prayer and thanksgiving event was in its fourth year and it attracted a slew of patrons to the National Theatre in Accra including the Bank’s customers, clients and employees who used the opportunity to renew their faith and hope in Jesus Christ. The theme for the 2022 event was “The Coming King.”

The Bank’s Product Ambassador, Samini, once again established his credentials as a force-to-be-reckoned-with on the music scene with the second Samini Experience Concert which left patrons and all present asking for more. With a repertoire which appeals to both the younger and older generations, Samini thrilled the audience and set the tone for greater expectations for the 2023 edition.

The Bank, in December, also received two awards. The “Best Commercial Banking Brand” and “Best SME Banking Brand” at the 2022 Global Brand Awards Ceremony held at Dubai Palm Jumeirah-Waldorf. This was in addition to other achievements by FBNBank earlier in 2022. These include “Best Bank for SMEs” at the Connected Banking Summit West Africa Innovation & Excellence Awards, “Corporate Social Responsibility (CSR) Excellence Award” at the Health Environmental Safety and Security (HESS) award and the Bank’s induction into the Ghana Club 100.

The crescendo for FBNBank in the activity packed December 2022, was a visit to the Royal Seed Home at Papaase on the Kasoa-Bawjiase Road in the Central Region. Cash and food items worth thousands of Ghana cedis were presented to the children of the Royal Seed Home as part of employees’ end-of-year activities. The Home has a total population of 150 children between the ages of 6 months and 19 years. Staff and Management of FBNBank extended this special goodwill as their contribution to support the Home during the festive season. Presenting the items, Grace Isaac-Aryee, Treasurer at FBNBank and leader of the delegation said “in a season like Christmas, we need to share goodwill and bring hope and joy to those who may not have the means to get what some people may take for granted. As driven by the Bank’s brand, we have put you first at this time and have come to spend time with you today. We have also come with our token of goodwill and friendship.”

FBNBank has in its 26 years of operating in Ghana remained focused on putting its customers and communities first. This, it has sought to do through the rich value and excellence of what the Bank contributes to the relationship with its stakeholders as a whole, particularly the customers. FBNBank Ghana is a subsidiary of First Bank of Nigeria Limited, which is renowned for its great customer service and general stakeholder engagement garnered over its 128 years of operation. FBNBank Ghana has 23 branches and three service points plus a network of agents across the country with over 500 staff. FBNBank offers universal banking services to individuals and businesses in Ghana.