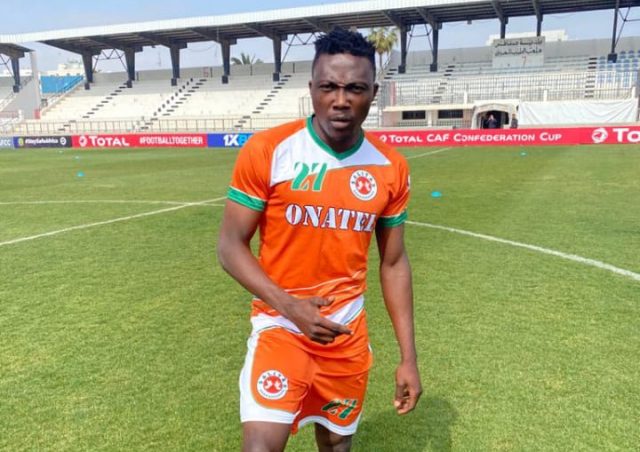 Hearts of Oak and Asante Kotoko scouts in Burkina Faso have both recommended to the respective clubs to sign forward Michel Batiebo, according to Ghana Sports Online sources.

Batiebo, 28, played against Ghana’s Black Galaxies during the 2019 WAFU Championship at the Stade Lat Dior in Senegal.

He has so far scored 9 goals in 7 games for the for AS Douanes in the Burkina Faso Premier League and is currently second on the top scorers chart which is led by Ivorian Salif Bagate who has notched 10 goals for Salitas.

Both Hearts and Kotoko are on the market in West Africa scouting for the best of striking talents and the name of the former Salitas attacker has featured strongly on their lists.

Ghana Sports Online’s checks in Burkina Faso has revealed that Batiebo signed an initial one-year-contract with AS Douanes in August 2021 and renewed his contract with the club before the commencement of the currently season with club President Ali Guissou playing an influential role in his acquisition.

Kotoko still have fond memories of their former Burkinabe striker Songne Yacouba and have always wanted to sign a like-for-like striker of his caliber. For now, the Porcupine Warriors see Batiebo as the ideal fit for their specs.

However, there is a little problem with Kotoko – the age and resale value of the striker. According to sources close to the 24-time Ghanaian champions, the age of the player would drastically affect his resale value per their estimation.

Batiebo turns 30 years by 2024 summer and the Kumasi-based side have been left to evaluate will these factors before making an official bid for him.

Meanwhile, their rivals Hearts of Oak do not place too much premium on resale value and age as head coach Slavko Matic is open to the signing of the forward regardless of his age and future sales. The departure of forward Daniel Afriyie Barnieh to Swiss side FC Zurich has left a huge gap in the attack of the Rainbow club.

The Phobians also recently parted ways with Cameroonian forward Junior Kaaba for non performance while Kwadwo Obeng Junior has come in for heavy criticism from fans. Hearts’ attempt to recall Issah Kuka from his loan spell at RTU has been met with some unforeseen difficulties as the Tamale-based side are unwilling to allow the forward return to Accra.

Ghana Sports Online has again picked up reliable information that would go ahead to send a proposal to AS Douanes once they receive the greenlight from Executive Board Chairman Togbe Afede XIV.

Surprise drone attack on Iran was work of Israeli intelligence, US...