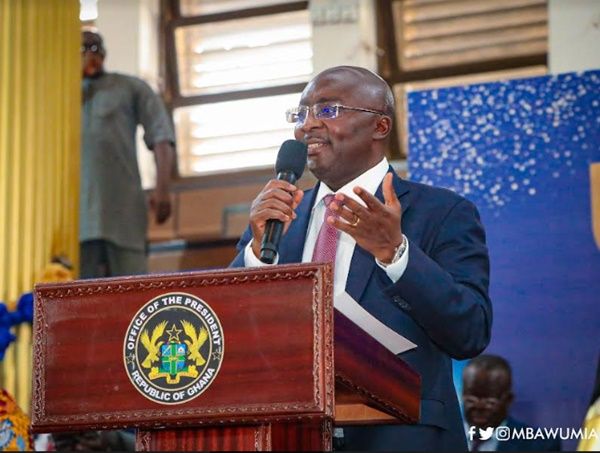 The Gold For Oil Policy will give Ghana the space to accumulate more international reserves as the country will save the $3 billion it spends on oil imports, Vice President Dr Mahamudu Bawumai has said.

He explained that the use of gold was specifically for oil imports in the face of declining foreign exchange reserves.

Unfortunately, the Vice President expressed concern that some people have misinterpreted this as Ghana being against the use of the US dollar in international transactions,” he stated.

“Far from it. We want to accumulate more US dollar reserves in the future.”

Dr. Bawumia said that the gold for oil initiative is working effectively after Ghana received the first delivery on Sunday, August 15, 2023.

So far, the Ministry of Lands and Natural Resources has announced 40,000 metric tons of oil arrived at the Tema port on Sunday, January 15, 2023.

The Energy Ministry, the Bulk Oil Storage and Transportation, and Oil Marketing Companies (OMCs) are to formulate plans for its distribution and sale.

Speaking at the 74th annual new year school of the University of Ghana on Tuesday, January 17, 2023, Dr Bawumia defended the policy saying that “How are we going to change this whole way of doing business as far as our natural resources were concerned? Take the case of gold in Ghana, we have mined gold for over 200 years, and when I looked at the data I realized that our total reserves of gold in Ghana was just 8.7 tonnes at the end of 2021.

“One of the largest gold mining countries, we are in the top 10 in the world but we have not accumulated gold to build our reserves.

“We looked at the other side of the balance sheet, we export gold and we import oil. The cost of oil import is about $3 billion a year. So we ask the simple question, why don’t we, since we have always got pressure in finding US Dollars to buy oil, rather reach an agreement to change our gold for oil and then, sell the oil in Cedis and then, use the Cedis to buy more gold, use that gold to pay for oil, sell the oil in Cedis and then you don’t need to look for the scarce foreign exchange to buy oil, which always leads to depreciation on the currency.

“With this idea, we said, let us do something that the textbooks don’t teach you, let us do something that is out of the box and this is why we said gold-for-oil. We quickly looked at this and we negotiated with the suppliers of oil who were very excited and happy to receive gold in payment. Thankfully, yesterday, Monday, Ghana took its first delivery of oil under the gold-for-oil programme.

“This is the cargo to test the framework to see if everything that has been put in place will work and by the grace of God, it is clear that the framework will work and if that should happen we are going to save a lot of foreign exchange and reduce the pressure on our currency.”

The Vice President continued that a major source of Cedi depreciation has been the demand for forex to finance imports of oil products and to address this challenge, the government is negotiating a new policy regime where sustainably mined gold will be used to buy oil products.

“We implement the gold-for-oil policy as it is envisioned, it will fundamentally change our balance of payments and significantly reduce the persistent depreciation of our currency with its associated increases in fuel, electricity, water, transport and food prices.”

He explained that this is because the exchange rate will no longer directly enter the formula for the determination of fuel or utility prices since all the domestic sellers of fuel will no longer need foreign exchange to import oil products.

Ga artists are not supported; we’re treated like we’re not Ghanaians”