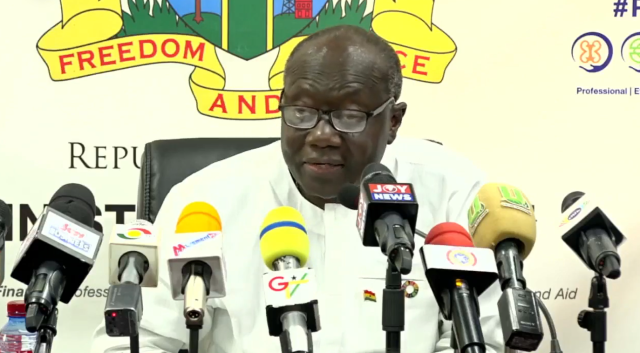 The Finance Minister, Ken Ofori-Atta has indicated that government will grant some concessions to Individual Bond holders under the e Domestic Debt Exchange Programme.

He, however, ruled out any move to abolish the programme or grant total exemption to individual bondholders.

“We are looking at a situation where maybe the zero coupon for bondholders in 2023 should be changed going forward”, he said.

Mr. Ofori-Atta noted that government is fully committed to taking measures that will lessen the burden on individual bondholders who have expressed worry about the current structure of the Domestic Debt Exchange Programme.

Mr. Ofori-Atta spoke in an exclusive interview with Joy Business’ George Wiafe on PM Express Business Edition, which will be aired on January 19, 2023 on Joy News channel at 9pm.

The minister made the disclosure ahead of a meeting with individual bondholders on January 17, 2023 at the Finance Ministry.

Mr. Ofori-Atta stated that government is committed to reviewing the programme to deal with some of the concerns of bondholders.

He argued that there should be the need for some burden sharing under the programme.

“This is because this Debt Exchange Programme is needed now to help stabilize the economy and help the country secure an IMF Programme before the end of the first quarter of 2023”.

Granting Concessions and Impact on Programme

There has been a rejection of the programme by banks, insurance firms, Pensioners and Individual Bondholders.

“Maybe, a lot more groups should have been brought on board, at the initial stages before the initiative was finally rolled out”, Mr. Ofori-Atta conceded.

Is there an alternative to the Debt Exchange Programme?

Responding to questions on having an alternative programme, Mr. Ofori-Atta maintained that such a proposal cannot be feasible.

“Looking currently at Ghana’s Debt Levels, everything must be done to bring it to sustainable levels in the short to medium term” he advised.

He stated that since last year, a lot of measures have been taken by government to reduce the debt with respect to “expenditure to GDP Ratio”.

“The rigidity of Ghana’s budget often makes it difficult for these proposed cuts to bring out the needed impact”.