Member of Parliament (MP) for Asawase Constituency in the Ashanti Region Alhaji Mohammed Mubarak Muntaka has said it is not befitting and embarrassing for President Nana Addo Akufo-Addo to commission an ordinary “coal pot” company describing the president’s action as shocking and sad.

“I was saddened and shocked when I saw that a whole president had gone to commission a coal pot; a common coal pot?” Alhaji Muntaka Mubarak Mohammed said this in an interview with Kumasi-based radio Angel FM monitored by MyNewsGH.com.

According to the legislator, he could not believe it when he first saw pictures of the president at the occasion until he later confirmed on other media outlets.

“When I saw it at first, I thought it was a photoshop so I didn’t believe it until I saw it on other online portals,” he revealed.

The Project according to government will see the manufacturing and free distribution of 500,000 improved charcoal stoves in Ghana to 350,000 rural households across the country by 2021 which will benefit approximately 1.8 million Ghanaians.

President Akufo Addo also said the project will create about two hundred direct jobs. “This is expected to increase to some, one thousand (1,000) direct jobs, as we scale-up,” the President added.

However, speaking with Kwame Tanko on the show “Angel in the Morning,” Alhaji Muntaka Mohammed insisted that President Akufo-Addo’s decision to commission the project himself is just populism and smacks of embarrassment.

According to him, the NDC as political party with their leader John Mahama will never engage themselves in such shameful practice because it does not befit a president, rather an Assemblymember would be a good personality to for that job. 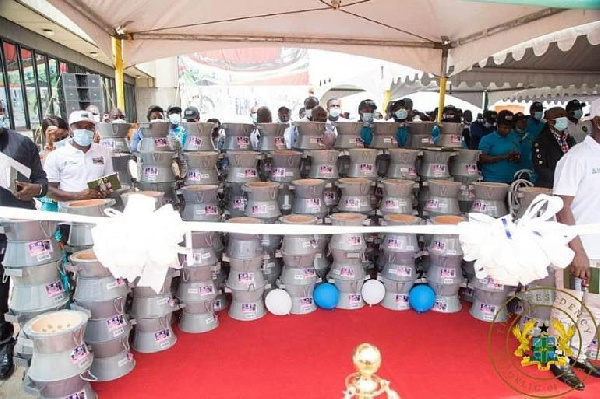 “This project should have been commissioned by the Assembly Member of the area and not the president,” he stressed.

He continued that, even during election of 2016 campaign, the NDC in his constituency begged the then President John Mahama to commission the Asawase market but he didn’t because he (Mahama) saw it as a minor project.

“Where will you get John Mahama to commission the E-Block, or Manhyia Hospital because we didn’t have the time to commission such minor projects,” Mr. Muntaka said.

“We never commissioned a single toilet,” he added.