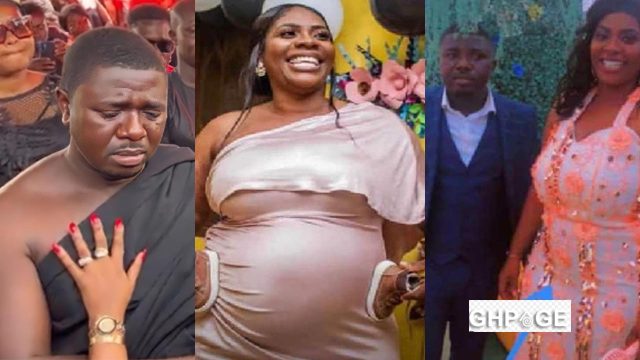 The bereaved Kumawood actor Komfo Kolege has for the first time following the death and burial of his wife, spoken.

The comic actor has gathered the strength to speak to colleague actor Kwaku Manu on his Aggressive Show on YouTube.

According to him, on the day the wife was due to deliver, he personally took her to the hospital.

At the hospital, Kolege mentioned that he was walking barefoot amid prayer while waiting for a good outcome on his wife’s safe delivery.

Moments after the wife was taken to the labour ward, the nurses came to him to fetch a pad for the wife – something he said was not available at all the pharmacy shops he visited.

He explained to Kwaku Manu that at the time the nurses came to him to buy the said pad, the wife had given up the ghost. It was hard for them to break the news to him at that time.

Kolege continued that moments later he saw some of his Kumawood brothers trooping in to the hospital he sent his wife to.

All these while, the Kumawood stars were told the sad news hence their coming but was difficult to break the news to him.

Chronicling how the sad news was broken to him, Komfo kolege revealed that he was earlier told that his wife had given birth to a baby boy when he approached them to know the update on his wife’s condition – a move by the Medics to calm him.

The then happy Komfo Kolege knelt down with hands in the air and thanked God for his wife’s safe delivery but the ‘fake’ joy was shortlived when he decided to go into the ward and see the baby and wife.

The Doctor on duty requested that he (kolege) see him (the doctor) off to his car before he goes to the ward and see the wife and newborn baby as he was earlier told.

The Kumawood actor further went on with the story and said he accompanied the doctor to his car, sat in and there the doctor pressed the central lock.

There, he felt uneasy. In the car, the doctor broke the heartwrenching and sad news to him that his wife is dead.

WATCH THE VIDEO BELOW, KOLEGE SAID A LOT HERE

According to a report, Kolege’s wife who was pregnant died while delivering her baby at the hospital.

The report further indicated Kolege not only lost his wife but also lost the unborn child.

Apparently, after the sad incident and upon hearing the news, Kolege took to his Facebook page to drop a cryptic post.

He wrote; ‘Black Saturday’ followed by a couple of crying emojis.

The mournful event saw a host of celebrities, family and friends of the bereaved Kumawaood movie star in heavy attendance.

A heavy-hearted Kolege who couldn’t hold back his tears was surrounded by family and close friends who offered him a shoulder to cry on.

FBNBank ended 2022 on a thankful and hopeful note