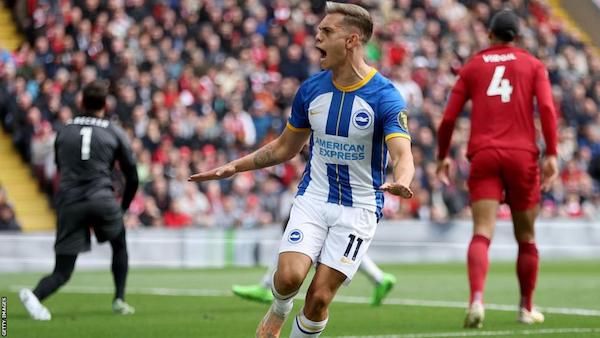 Arsenal have signed Belgium international Leandro Trossard from Brighton for £21m plus add-ons.

The 28-year-old forward’s contract runs until 2027 and has the option of being extended by a year.

He has scored seven goals and provided three assists in 16 top-flight games for Brighton this season, including a hat-trick against Liverpool at Anfield.

Trossard also made three appearances – two as a substitute and one start – for Belgium at the 2022 World Cup.

Arsenal say they have submitted the required documents and hope Trossard will be available to face Manchester United at Emirates Stadium on Sunday (16:30 GMT).

The Belgian attacker will wear number 19 for the Gunners and manager Mikel Arteta has hailed his quality.

“It is good work from everyone at the club to complete the signing of Leandro,” the Spanish boss told the club’s website.

“He is a versatile player with high technical ability, intelligence and a great deal of experience in the Premier League and at international level.

“Leandro strengthens our squad as we head into the second part of the season and we’re all looking forward to working with him.

“We welcome Leandro and his family to Arsenal Football Club.”