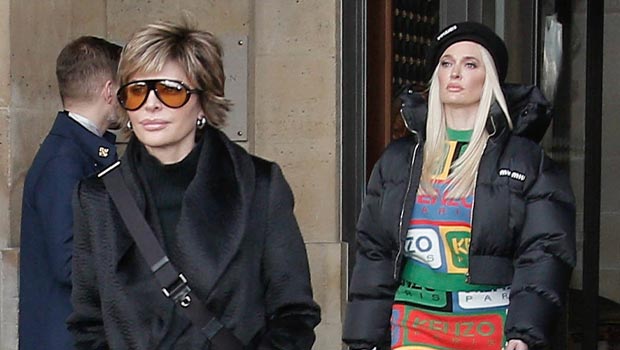 Lisa Rinna and Erika Jayne aren’t letting the former’s Real Housewives of Beverly Hills departure get in the way of their friendship. The former costars were photographed out and about in Paris during the afternoon of Friday, Jan. 20, ahead of French luxury fashion house, Kenzo’s Paris Fashion Week runway show. They were first seen leaving their posh hotel, the Hôtel Crillon (seen below), before posting about their explorations on social media.

Lisa, 59, took to her Instagram Story to show off her balcony view from her hotel room, footage of the iconic Eiffel Tower, some goodies she was gifted from Kenzo, and a classic French croissant. She also posted some snapshots of her and Eika, 51, enjoying what appeared to be martinis in their gorgeous hotel. “Les secrets voyagent vite à Paris,” she captioned the slideshow, which translates to, “Secrets travel fast to Paris”.

Of course, the duo was dressed to the nines for their Parisian adventure. The former Days of Our Lives actress looked chic and simple in a black, fur-trimmed coat she paired over black slack and a black mock neck sweater. She accessorized with retro sunglasses and completed the look with black wedge boots.

Erika, for her part, looked like a rainbow in a blue, red, yellow, green, white, and black mini dress by Kenzo. She wore it over translucent black tights and matched it with black high heels. She added a beret to finish her funky look.

Both the Pretty Messes author and Lisa slipped into new looks for the Kenzo show. Lisa changed into a fun muted purple and red striped pantsuit she wore with a plaid button-down. She added more color to her bold look with an orange floral brooch and a bright orange beret that had “PARIS” printed across the top. Erika also changed into a pantsuit, which was black with white pin stripes. She added a pop of color with a chain choker necklace with a red accessory that had “KENZO” emblazoned across it.

The girls’ trip came about two weeks after Erika said she will deeply miss Lisa on The Real Housewives of Beverly Hills. “I’m going to miss Lisa very much,” she told TMZ cameras on Jan. 6. “I mean, obviously, I think she’s a very close friend of mine in my personal life, so you know, I will still see her, but she will be missed and I think everyone will feel it.”

When asked who could replace her, she said the job is impossible. “They can’t. She’s the GOAT,” she gushed.

Lisa announced her departure from the hit Bravo show after eight seasons. “This is the longest job I have held in my 35 year career and I am grateful to everyone at Bravo and all those involved in the series.  It has been a fun 8-year run and I am excited for what is to come!” she said in a short and simple statement to PEOPLE on Jan. 5.

She left the show after having a rough season and being called out for being a “bully” by Kathy Hilton, 63, at the Season 12 reunion. “You fight with everybody,” she slammed. “What you did to my sister, and you drove Lisa Vanderpump off the show? I mean, the list can go on and on.” She later added, “You are the biggest bully in Hollywood, and everyone knows it.”