After the controversy that characterised the signing of the book of condolence opened by the state for the late former president Jerry John Rawlings, former President John Dramani Mahama may have to sign the book again.

On Friday, November 13, prior to his signing of the book, Mr Mahama’s party claimed it was taken away to deliberately prevent him from signing it.

“We were at the residence of the family to offer our condolences,” General Secretary of the National Democratic Congress (NDC) Johnson Asiedu Nketia told journalists.

“The maternal family from Anlo was represented, the nuclear family as well. We were led by our flagbearer. Upon arrival, we were informed that the book of condolence had been taken to the [Accra International] Conference Centre, so we should go there.

“By the time we reached there, the state officials had locked up the [Accra] International Conference Centre, taking the book away.”

He continued: “When we enquired, we were told that they had been directed to prevent Mr. Mahama from signing.”

But a release dated November 13, 2020, from the State Protocol Department, said the signing of the book of condolence opened for the late Jerry John Rawlings will begin on Monday, November 16 and end on Friday, November 20 at the foyer of the Centre.

From the schedule attached to the release, the Speaker of Parliament will be the first to sign the book between 9:00am and 9:30am.

He will be followed by the Chief Justice and members of the Judicial Council.

It is after the Council, which includes justices of the Supreme Court, that the former presidents will sign.

Former President John Agyekum Kufuor has been listed first and then, Mr Mahama, who is the current leader of the party founded by Mr Rawlings, then signs.

But it is unclear if he will sign the book again.

Former First and Second Ladies will follow the two former presidents and then the Chief of Staff will sign hers. The day will close with all presidential aspirants and other political leaders.

Tuesday, November 17 will see the Inspector General of Police (IGP), the Chief of Defence Staff (CDS) and other heads of security agencies signing the book with heads of religious bodies as well as ambassadors and high commissioners following.

Heads of government institutions will take their turn on Thursday with the public following. Members of the public will continue on Friday, November 20.

There will be no one-week celebration as the family is yet to decide on a date for the final funeral rites. 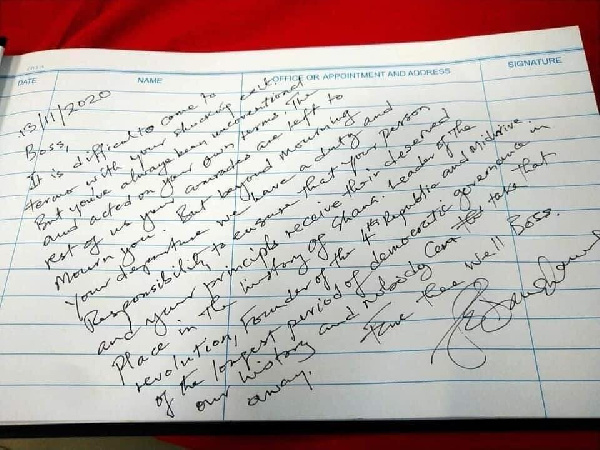