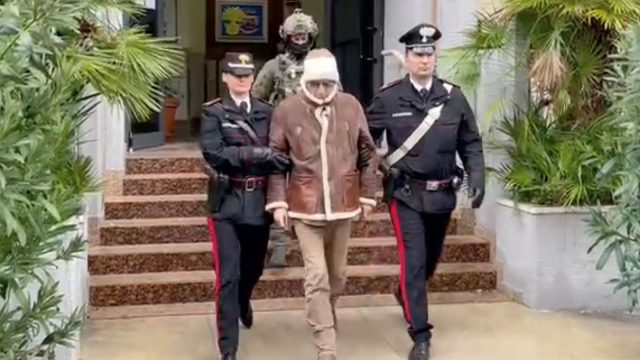 A man whose identity was used by Italy’s most wanted mafia boss – Matteo Messina Denaro – has been arrested in Sicily.

Andrea Bonafede was arrested by Carabinieri police on a warrant issued by judicial authorities in Palermo, the capital of Sicily.

When Messina Denaro was captured last week at a Palermo clinic where he was receiving chemotherapy, he was using an official identity card with Bonafede’s name but with his own photo.

Bonafede is suspected of being a member of Cosa Nostra, as the Sicilian Mafia is known, and helping Messina Denaro to carry out his role as a major mob boss.

Accusations in the warrant said that with Bonafede’s identity, the 60-year-old fugitive was “able to move on the territory [of Italy], eluding law enforcement, as well as access national healthcare without revealing his real identity”.

Investigators suspected that Bonafede also received €20,000 (£17,500) from the mafia boss in order to buy a house in western Sicily that served as one of Messina Denaro’s hideouts.

Police have searched at least three homes in the town of Campobello di Mazara, western Sicily, near Trapani, which they say were used over the last several months.

During the searches authorities found airline ticket receipts, receipts from expensive restaurants, jewellery and posters from films including The Godfather and Joker.

A black Alfa Romeo Giulietta car, which Messina Denaro used to drive himself around, was also found with Bonafede’s identification documents, the arrest warrant said.

Messina Denaro had been on the run since 1993 and was sentenced in absentia to a life term for murders he carried out in the early 1990s.

He was convicted as one of the masterminds behind the 1992 bombings – one of which killed Italy’s top anti-mafia magistrate, Giovanni Falcone, and the other killed a fellow magistrate, Paolo Borsellino, two months later.

He was billed as the “last godfather” and was the last fugitive member of a generation of mobsters who terrorised Italy.

American Actor Charlamagne Opens Up About What He Didn’t Like About Ghana During His...

If you don’t understand the assignment, just sit down – Kafui Danku to Sugar...