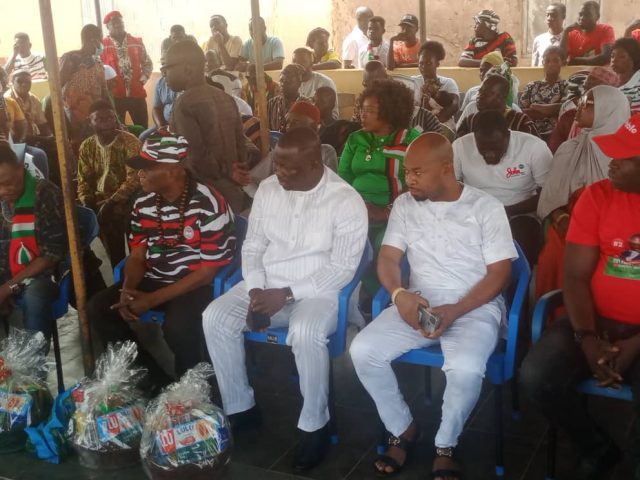 Mr Mustapha Foyoo Gbande, National Deputy Secretary of the National Democratic Congress (NDC), has received a rousing welcome at Dambai in the Krachi East Municipality of the Oti Region after his recent victory.

Mr Gbande and his entourage were welcomed with songs from the people, who lined up the streets.

Scores of youths met the deputy secretary on the outskirts of Dambai and led him into town.

Banners with congratulatory messages hang by the roadside.

As his entourage slowly headed to Nana Kwaku Biyenor’s palace, the people, young and old poured out in their numbers onto the streets and followed him to the palace.

In his remark at the chief’s palace, Mr Gbande appealed to all New Patriotic Party members in the region to join the NDC to accelerate rapid development.

He thanked Nana Biyenor for his continuous support and prayers and appealed to party members to live in peace always.
Nana Kwaku Biyenor asked the Deputy Secretary to always remember Krachi East Municipality as his hometown.
He asked him to be law abiding, be respectful to all and express the hope of seeing him as a potential presidential candidate in the future.

Confusion hits Bibi Bright’s marriage after she gives birth to a...