Fast-rising musician Fameya has finally reacted to the video which showed that he assaulted his manager, Ogidi Brown.

According to the ‘Nothing I get’ hitmaker, he never slapped his manager as the video suggested.

He also stated that he has reached out to his manager and the one who shot the video to apologize to them but it all proved futile.

He made this revelation in an Instagram post, apologizing to his manager and Ghanaians for his behaviour.

“He wrote; “The last message I sent my manager was, boss I love you and I’m sorry let’s work but I just want you to do the right thing with 3 miss calls, we Dey tugeda, wrote this message in our management group!!!called the guy who shot the video too I called him and apologized too!!!even before the video came out but I got no reply what I saw the next morning was I slap my manager Ogidi Brown oh how? I didn’t but if I did as the world is saying may you forgive me Ghana forgive me God forgive me I’m human I still love you” 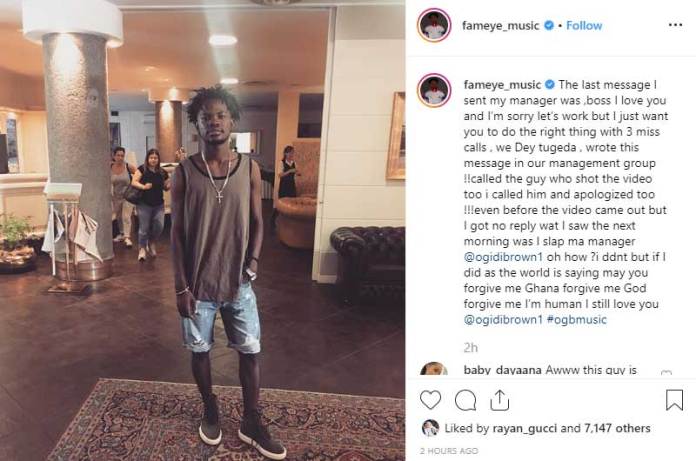 It was reported over the weekend that Fameye assaulted his manager Ogidi Brown over money issues.

Fameye who is currently on a Europe tour was seen in the video having a heated argument with his manager over money he took after performing at a show.

Watch video of Fameye slapping the manager below:

I’ll stop posting my nudes when I marry

‘Respect Everyone But Fear No One, Nobody Has Two Heads’ – Yul Edochie Charges Fans

Ghanaians are very forgetful, MTN Ghana is bribing us back with...

NCA fines MTN more than GH¢100,000 for non-compliance to directives

University of Energy will be renamed after Dr Busia

I’ll stop posting my nudes when I marry

‘Respect Everyone But Fear No One, Nobody Has Two Heads’ –...

Sarkodie announces the new Artist he is about to blow with...