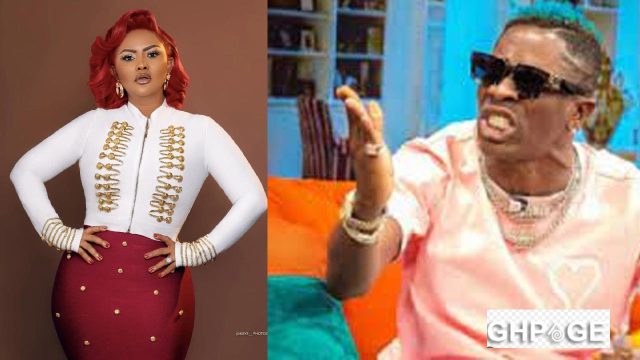 Shatta Wale slandered the UTV United Showbiz Host and described her as an incompetent person who was employed by the TV station for the obvious reason.

As proposed by Shatta Wale to Dr Osei Kwame Despite, he should sack Nana Ama Mcbrown and employ university graduates who know more about the current entertainment terrain.

Although Shatta Wale eulogized Dr Osei Kwame Despite creating job opportunities for the youths their decision to employ Mcbrown is a big ‘NO-NO’ for him.

Shatta Wale is quoted saying – “You people are villagers, all your programs are nonsense, Nana Ama McBrown doesn’t know anything about presenting” in a part of the video.

After days of waiting, Nana Ama Mcbrown has fired back at Shatta Wale after an unprovoked attack on her personality and calling for her dismissal went rife.

As we know and have studied Mcbrown, she hardly comes out openly to react to attacks on her yet she does it subtly.

Once again, Empress Mcbrown has pulled a fast one.

Nana Ama McBrown released a video lip-syncing along to Sarkodie’s Original. Her facial expressions while performing in the video tell it all.

The lyrics of the song could be subtle way as a response to Shatta Wale over his attacks. Watch the Video Below: