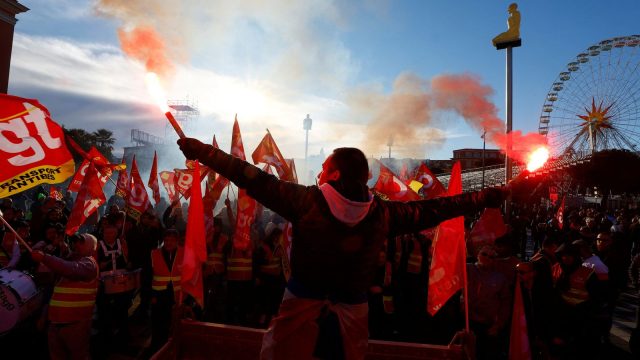 Protesters in France are halting high-speed trains and disrupting electricity supplies in nationwide strikes against reforms over the country’s pension age.

The majority of trains around the country have been cancelled, while electricity workers pledged to reduce power supplies as a form of protest, with more than 200 rallies expected across the country today.

The strikes were sparked by a proposed bill to increase the nominal retirement age from 62 to 64, meaning more people would have to work longer before receiving a pension.

Unions argue the pension overhaul threatens hard-fought rights and propose a tax on the wealthy or more payroll contributions from employers to finance the pension system.

Employees in sectors including transport, education and energy are participating in the strikes.

The SNCF national state-owned railway company said as well as French trains, some international connections have also been affected.

While about 20% of flights out of Paris’s Orly Airport have been cancelled and airlines are warning of delays.

In Paris, students blockaded at least one high school in support of the strike action. Some 65% of high school teachers went on strike, the SNES FSU union said.

Police unions opposed to the retirement reform are also taking part, while those who are on duty are bracing for potential violence if extremist groups join the demonstrations.

The proposed bill has also been criticised by workers already facing a cost of living crisis but French President Emmanuel Macron said the reform is the only way to keep the state pension system solvent.

The government is formally presenting the pension bill on Monday.

The changes would mean workers must have worked for at least 43 years to be entitled to full pension.

For those who do not fulfil that condition, like many women who interrupted their career to raise their children, the retirement age would remain unchanged at 67.

Those who started to work early, under the age of 20, and workers with major health issues, would be allowed early retirement.

Protracted strikes met Mr Macron’s last effort to raise the retirement age in 2019 but he eventually withdrew it after the COVID pandemic hit.

How to Watch ‘Kaleidoscope’ on Netflix. A Complete Guide