Victoria with her husband Eugene

Victoria Lebene, wife of blogger Eugene Osafo-Nkansah remains strong in the face of adversity. Her husband has been accused of having an affair but the claim, no matter how distasteful, cannot shake the foundation of their marriage, she indicates in her anniversary post.

“This boat is unsinkable,” she says while singing praises to God.

In the post that was made hours after her husband’s, Mrs. Osafo-Nkansah trumpets the goodness of her Maker and the role He’s played in their marriage.

“God is the biggest thing I’ve ever experienced in my life… he has made us Unstoppable, unbeatable and unbroken. Today marks the best day of our marriage.”

Eugene who doubles as the producer of Peace FM’s Entertainment Review show has been inundated with accusations by showbiz personality Abena Korkor.

Known to be suffering from bipolar disorder, Abena Korkor during one of her hypomanic episodes claimed to have had an affair with Eugene. She also said Eugene on several occasions professed love to her and insisted he never loved the wife.

Although Eugene has neither denied nor confirmed the claim, he said in his anniversary post that he is “ashamed and disappointed” following “everything that has happened in the past few days”.

“I’m facing the biggest public shame ever in my life, But in the midst of the shame, the public ridicule, the insults, the trolls and the judgements, there’s only one woman who has found the courage to stand by me and doing everything as a wife. Today I proudly celebrate you Mrs. Nkansah. If this is not an Angel, then I don’t know who she is, if this is not every man’s dream then I don’t know what men want,” he said.

Eugene, known in the blogging space as Nkonkonsa has however called on the general public to remember his wife in prayers “because she needs it now more than ever”. 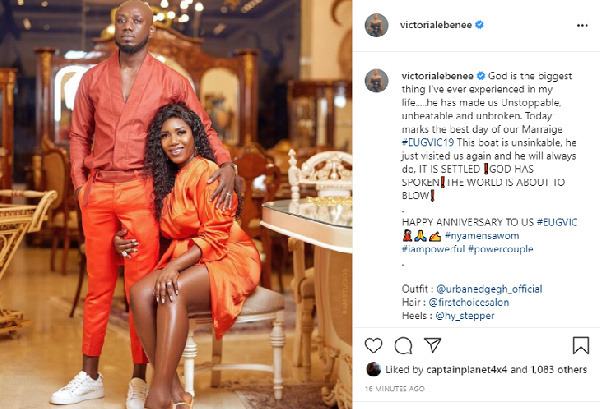 We Will Shut Down Nigeria If There Is A Single Bloodshed

I used to think I was a hard guy until Dr.UN...

Ghana has no future with NDC and NPP in leadership

I was better player than Roberto Carlos—Adjah Tetteh

Our boat is unsinkable – Victoria Lebene stands by husband despite...