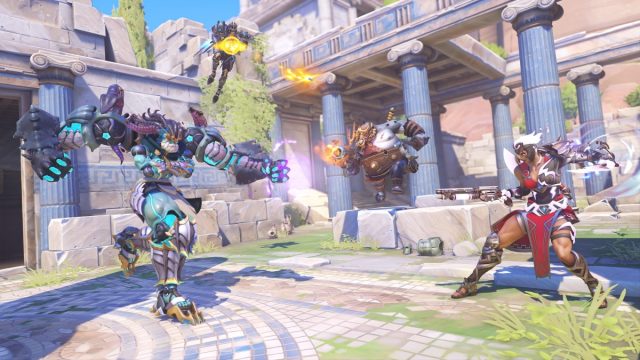 Overwatch 2’s Battle for Olympus limited-time event is now live. The latest update ushers in the new seasonal mode, which introduces a free-for-all deathmatch game featuring seven select Heroes, reimagined as Greek gods, goddesses, and creatures. Blizzard Entertainment had previously dropped a trailer for the event, teasing some of the new god-like abilities that stack on top of your champions’ ultimates. The studio has now shared some patch notes that break down each ability, alongside a global leaderboard that serves to immortalise a hero with an in-game statue. The event is scheduled to run until January 19.

To re-iterate, Battle for Olympus is simply the standard Overwatch 2 deathmatch mode with a fresh coat of Olympian paint. Bear in mind, that the new effects are restricted to this mode only, and that the quick play and competitive segments will continue with the Heroes’ normal kits. The seven playable heroes included in the game mode are Junker Queen, Lució, Pharah, Ramattra, Reinhardt, Roadhog, and Widowmaker — all of whom are armed with “Divine” ultimates that last longer than the standard ones, and add changes to your regular moveset. Furthermore, each character is designed and named after an appropriate Greek legend, the skins for which can be purchased using coins earned by completing the weekly challenges. Just like previous seasonal events, Battle for Olympus can be accessed by navigating to the Arcade section.

When playing Lúcio reimagined as Hermes — thanks to his speed — his Divine Sound Barrier ultimate will last 20 seconds, granting him infinite ammunition, the ability to jump again after leaping off a wall ride, and greatly increased attack and movement speed. Furthermore, if his Boop action knocks enemies into a wall, they will be dealt extra damage and a stunned shortly. Since Overwatch 2’s Battle for Olympus is a deathmatch mode, this off-healer’s abilities only benefit him. Meanwhile, the sniper Widowmaker, who is fashioned after the snake-headed Medusa, can turn enemies looking at you into stone, when scoped in. This, of course, goes in line with the actual Greek Gorgo, who petrifies those who gaze directly into her eyes. Not to mention, the ultimate enables a high-risk high-reward playstyle, urging you to get enemies to notice your vantage point.

What you’re getting here is essentially a God Mode for Overwatch 2, where all powers are pulled straight from Greek mythology. Minotaur Reinhardt’s Divine ultimate also lasts 20 seconds, letting him heal up whenever an enemy is slammed or charged into a wall. He can now pin up to three opponents at once, with wall slams dealing extra damage and setting the next charge cooldown to just 0.5 seconds, which is incredibly overpowered. Zeus Junker Queen is equipped with Divine Rampage, where all damage inflicted using her Scattergun has a chance to apply additional lightning damage to her abilities. Meanwhile, the new tank Ramattra is equipped with the sea god Poseidon’s boon, starting with the Ravenous Vortex, a large whirlpool that sucks in enemies and then launches them in the air. You can also shoot out large water blasts that deal heavy damage.

Roadhog only has one eye in the mode, thanks to his power being fashioned after Cyclops. His 15-second-long Divine Roadhog ability greatly expands his body, adding 600 health points, and adds the ability to hurl boulders instead of his normal ultimate fire. His melee attacks, on the other hand, deal five times more damage than usual and push enemies away with each strike. And finally, there’s Hades Pharah, who is now mobile when performing her Rocket Barrage, making her less open and vulnerable to being stunned or killed while in the animation. Also, during the Divine ultimate’s 20-second period, each kill heals Pharah and extends the duration of the effect.

As stated before, the hero with the highest number of eliminations by the end of the Battle for Olympus event will be forever immortalised with a statue on the Illios Ruins map. Additionally, Overwatch 2 is now littered with special challenges that help unlock new, thematic voice lines, player titles, and new cosmetics to buy using Overwatch Coins. There’s a checkpoint-based challenge as well, which unlocks the Legendary Winged Victory Mercy skin.

What is Scorpion, the police unit at the centre of Tyre Nichols’ death? |...