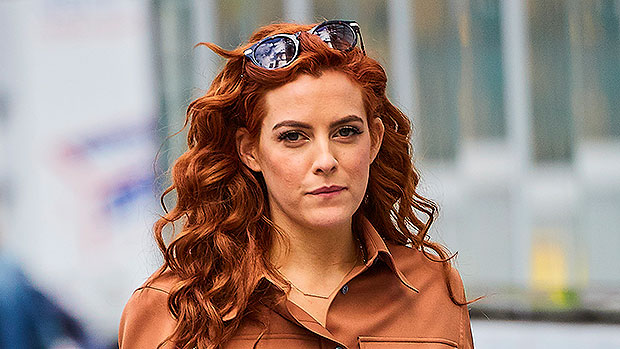 Riley Keough, 33, looked downcast as she arrived in Memphis, TN ahead before her mother Lisa Marie Presley‘s funeral. The Daisy & The Six star was seen descending down the stairs of a private plane as she held a baby on Saturday, January 21 in the first images since Lisa’s death, published by Daily Mail. It’s unclear who’s child she’s holding as Riley — who wed Ben Smith-Petersen in 2015 — does not have children of her own.

She wore a beige athleisure ensemble as she carried a coffee cop in her right hand, along with a black purse, as she headed right into a private Ford Sprinter Van to head to Graceland a day before the public memorial service at the home of her late grandfather Elvis Presley. She was later seen on the grounds of the Memphis estate as she smoked a cigarette and also looked at her phone.

In other images, her grandmother Priscilla Presley, 77, uncle Navarone Garibaldi, and ex-stepfather ex-husband Michael Lockwood could also be seen arriving in a separate plane.

The service will be publicly live streamed per the Graceland official site, and you can watch it here. “In addition to family and friends, the general public is invited to attend,” Graceland’s website confirmed. “Following the service, there will be a procession to view Lisa’s final resting place in Meditation Garden.”

Riley has yet to make a public statement about the death of her mother Lisa Marie Presley at the age of 54 — however, she finally broke her silence on Friday afternoon with a throwback Instagram photo. In the image, she can be seen as a child snuggled up to her mother as she holds a bouquet of flowers. Lisa Marie, wearing an oversized denim jacket, beams back down at her first-born — whom she shares with ex-husband Danny Keough — and smiles. It’s unclear exactly when the photo was taken, however, it appears to be from the 1990s given the styles and Riley’s age. She simply captioned the image with a heart.

Lisa tragically lost her life after going into full cardiac arrest at her Calabasas area home on January 12, 2023. Paramedics performed CPR and administered adrenaline shot to jump-start her heart, then immediately rushed her to West Hills Hospital. At the medical facility, she was sadly confirmed to be brain dead — prompting her family to sign a DNR form. She later died the same day after a second heart attack.

Lisa Marie Presley’s Family Will Have Private Funeral Before Live Streamed Memorial: How To Watch

Your Days On Earth Are Numbered… – Alpharians Rain Hot Curses On Twene Jonas...