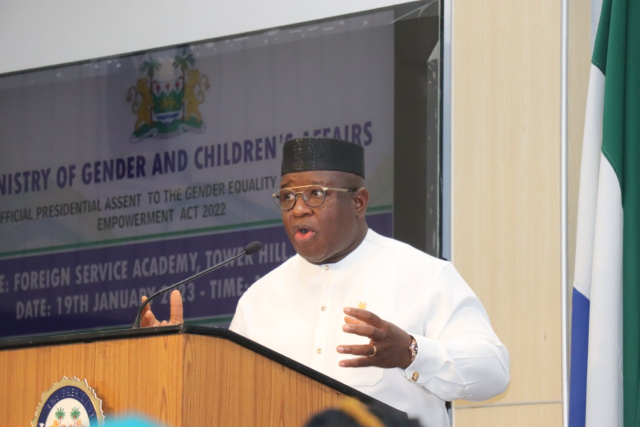 The Sierra-Leonean President, Julius Maada Bio, has signed the Gender Equality and Women’s Empowerment, GEWE Bill 2022 into Law. The law will comprehensively address gender imbalances such as the principles of inclusion, representation, participation, and institute a more responsive posture on gender.

These include at least 30% representation of women in Cabinet and in Parliament, and in the appointments of Ambassadors and High Commissioners. Thirty percent of all positions in Local Councils and 30 per cent of jobs in the Civil Service will be available to women while maternity leave has also been extended from 12 weeks to 14 weeks.

President Maada Bio recalled his unconditional promise to include women in national life, governance, and development saying, “women’s economic empowerment and protection are not political rhetoric. Empowering women is essential to the health and social development of families, communities and countries.”

He said in line with this, his government has achieved gender parity at the basic education level, registered higher achievement and learning outcomes for girls in secondary schools, and guaranteed tuition-free education from primary school to university graduation for all girls studying STEM disciplines.

The Sierra-Leonean President listed achievements of his government such as the fight for justice for survivors of sexual violence, healthcare to promote maternal and child care, economically empowering women who dominate the informal economy for pregnant women, lactating mothers.

The Minister of Gender and Children’s Affairs, Manty Tarawalli, commended the President for the political will to make the law a reality. She said the law was long in coming because as she put it, “the climate wasn’t right in terms of women’s readiness and men not being accommodating for this sort of growth.”

She said there were challenges and the government had to cross massive hurdles to be able to change “the conversation from rights-based to economic growth” adding that, “those who were opposed became willing and ready to have the conversation.”

Tarawalli was of the view that the law was also about economic growth which would move Sierra Leone to a middle-income country, saying, “this cannot happen when 52% of the country’s population who are women are outside the economy and leadership position.”

A 45-year-old trader, Mariamma Kalla, said it was unfortunate that she would not benefit from the Law but on the other hand, she was happy that her two daughters will not be left out in the change that is sweeping through the country to improve the lives of women.”

Black Sherif, 50 Cent And Other Top Stars To Perform At Wireless Festival In...