Monalisa Abigail Semeha aka Mona Gucci is a Television presenter

• Mona Gucci says her life is under threat

• The issue, she says, is being investigated by the police

According to Mona, some individuals have on several occasions had meetings to scheme her death.

Although she failed to mention names and also failed to provide evidence to back her claim, Mona Gucci in an Instagram post on August 17, 2021, said:

“Dear family, let me tell you something some people gathered with conference calls meetings against me so I can be killed. After their meetings, one of them quietly called me to tell me and asked me to report to the police which I have done already because the juju side isn’t working, they wonna go physical.”

“Even though the police intelligence are collaborating with the FBI to bring the people to book, I stand on psalm 91 GOD IS MY SHIELD AND MY PROTECTOR. Look at these toothless bull dogs coming to fight the daughter of the LION OF THE TRIBE OF JUDAH! Their fathers,” She added.

The Onua FM presenter however bemoaned how Ghanaians take pride in destroying each other rather than supporting themselves.

Buttressing her point, she said the Hollywood industry has flourished over the years because they effortlessly uplift each other.

“I am not afraid to declare MY JESUS CHRIST to y’all evil industry planners. Oprah Winfrey, Wendy Williams, jimmy kimmel, Ananda Lewis, Larry king, Ellen n a lot more are all top presenters in America and have their fan base not for once will there be a meeting amongst them to execute another they support each other only in Africa fellow industry people do this.” 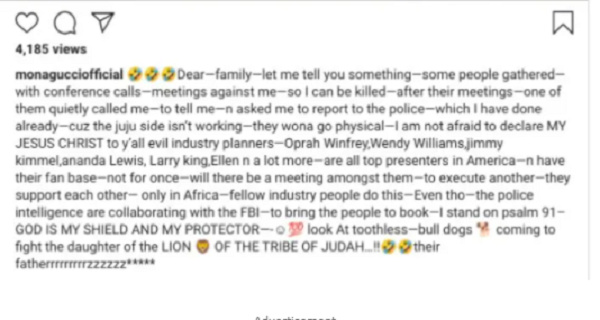