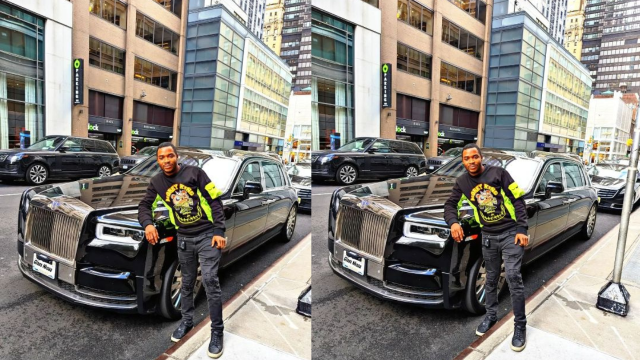 US-based Ghanaian influencer Twene Jonas has been caught in his web of lies after he posed with someone’s luxurious car claiming to be his.

Twene Jonas who has become popular in the media space due to how he addresses issues facing the country has on many occasions mentioned that he is more prosperous than the majority of wealthy men in the country.

In a photo he posted on his Instagram page, he could be seen posing with a Rolls Royce Tail Boat which he claimed he just acquired as his first gift for the year 2023.

Remember your dreams and fight for them. You must know what you want from life. There is just one thing that makes your dream become impossible, the fear of failure. Never give up ?? Weekend vibe? I’m chilling in my $28 Million, Rolls-Royce Boat Tail. Life is good in Heaven on Earth ?? Glass Nkoaa ? We run the city ??? The system is working 24/7?? Hw3 fomm ? Didi free ??

After posting the photo online, netizens realised that the number plate on the Rolls Royce was Glass Nkoaa but what gave him out was the fact that the plate was edited.

They called him out for trying to lie about something that isn’t his but just want to show it off on social media for likes.

One user even schooled him on the exact model of the Rolls Royce he claimed to be a tail boat.

Read the comments below:

Addius2002: “Sia Rolls Royce dollars who be your kid for here you’re the same person who said there’s no car worth 1 million dollars now dier you’re having 8 million dollars car instead masa if you’re saying the truth we dey support you but for this one dier we won’t take it wai ???”

RE: Trouble Looms At Otanor Over Demolition Of Properties By Land Guards – Family...