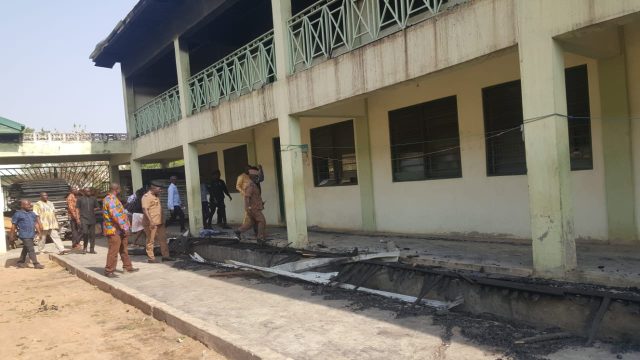 Dr Hafiz Bin Salih, the Upper West Regional Minister, has commiserated with the victims of the fire disaster that occurred at the Wa Senior High Technical School (WASECTECH) in the Wa Municipality.

“I am not a student, I was not present when it happened, but I can tell you that after haven gone through all the affected places, I am touched by what has happened,” he intimated.

About 114 female students of the school had been directly affected by the fire disasters that occurred at the school on Sunday and Monday nights both at about 20:19 HRS GMT leaving two hostel accommodations destroyed.

Dr Salih acknowledged the devastating impact of the disaster on both the students and the leadership of the school and assured them of the unflinching support of the Regional Coordinating Council in returning the school activities to normalcy.

According to him, he had scheduled meetings with the Ministry of Education and the GetFund Secretariat and would table the incident before the two institutions for swift intervention.

“What I have instructed the headmaster and the regional director to do is to formally put into writing what they want done here.

I have scheduled a meeting with the Minister of Education and GetFund so that the facilities can be worked on with the speed of light,” Dr. Salih indicated.

He said they will put in place measures to ensure the awful fire outbreak incident did not repeat at the school.
The minister urged the students to put the sordid experience behind them, recover as soon as possible, and to continue with their academic activities while the authorities work to fix the damage caused saying, “Closing down the school will be the last resort.”

He also assured of getting the Ghana Water Company Limited to establish fire hydrants in all educational institutions in the region to help facilitate the intervention of the Ghana National Fire Service (GNFS) in times of fire outbreaks in those institutions.

Dr Salih commended the various institutions that played diverse roles in putting the situation under control, including the GNFS and the school authorities.

Mr Razak Abdul-Korah, the Upper West Regional Director of Education, noted that they would meet with the leadership of the school to discuss appropriate ways of supporting the students so that they would not be destructed in their studies.

Mr Ismail Salih, the Headmaster of the school, said all the female students in the school had been moved to stay at the Assembly Hall while steps were taken to resettle them.

He indicated that as of the time of the visit of the Regional Minister, six students were still on admission due to the shock they had.

He said they would solicit the assistance of the Nation Investigations Bureau (NIB) in that regard.