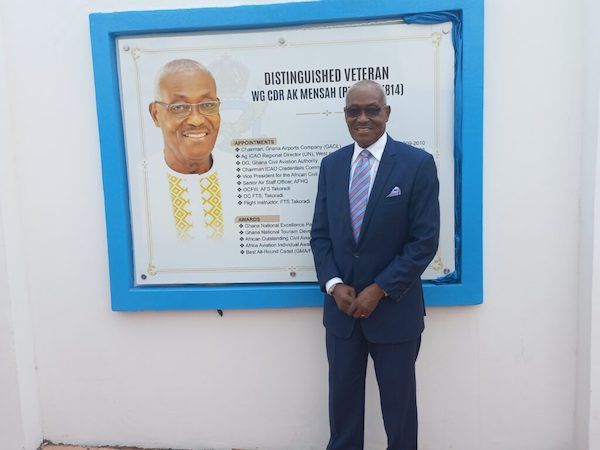 On Thursday, 19th January 2023, Wg Cdr Andy Mensah (Rtd) was, in an impressive ceremony at the Air Force Headquarters, Burma Camp led by the Chief of Air Staff, Air Vice-Marshal (AVM) Frank Hanson, honoured by the Ghana Air Force for his service to God and country.

His name was engraved in gold on a monument at the Air Force HQ, Burma Camp.

He eulogized Wg Cdr Andy Mensah, and thanked Mrs Marian Mensah for her excellent support to her husband. Apart from the citation immortalizing him, Wg Cdr Mensah was presented with a miniature citation to adorn his hall with. The AVM also quoted from a previous article in which I stated;

“In my recent article titled “Give me my flowers while I can smell them,” I appealed to Ghanaians to make Ghanaians they admire, know of their admiration for them because of their contributions to life locally, nationally or internationally. I added that, we should not wait till they lie stiff in their “chop-box” as my son called his grandpa’s casket, before heaping praises on them. I concluded the article with the quote below.

Has Ghana honoured our deserving heroes?

In September 2001, Zimbabwe’s Centre for Peace Initiatives in Africa (CPIA), honoured the first African United Nations Force Commander, Ghana’s General EA Erskine by naming a Centre after him called the “General Erskine Research and Documentation Centre” (GERDC.) With his death in 2021, hopefully a monument will be named after him posthumously.

However, there is a waiting opportunity to honour Ghana’s second UN Force Commander and former Chief of the Defence Staff (CDS) General Seth Obeng while he is alive.

While there certainly are others, I have restricted myself only to the institution I know well, the military.

As Bob Cole said, multitudinous platitudes heaped during Thanksgiving Services mean nothing to the deceased as they lie stiff in the “chop-box” as a little boy called his grandfather’s casket!

While they are alive, let us give deserving individuals the recognition, praise and honour for their contributions to Ghana/humanity, and also to encourage the younger generation to make sacrifices, in the words,

“Give me my flowers while I can still smell them.”

A product of Mfantsipim School (MOBA 1961), he enlisted in the Ghana Armed Forces as an Officer Cadet in 1963. He was commissioned in 1965 into the Ghana Air Force, and won the Osagyefo Dr Kwame Nkrumah Award for the best trainee pilot on commission as a Second-Lieutenant.

In 1967, he was one of six pilots and two Air Traffic Controllers Ghana sent to Zaire, now DR Congo (DRC), to help stabilize the political situation.

A Qualified Flying Instructor (QFI) as the then Maj Mensah was in 1976, he headed the Flight Training School, Takoradi where Ghana’s Air Force pilots are trained. At the time, the Air Force used Army ranks until the change in 1978. Not surprisingly, with his instructors Capt Awuku, Capt Mante, Capt Quaison etc, he produced former Chiefs of Air Staff (CAS) like Air Marshal Samson-Oje, AVM Nagai, Gp Capt Forjoe and Sqn Ldr Ebo-Bartels.

Wg Cdr Mensah was one of the first Ghanaian officers to graduate from the Nigerian Armed Forces Command and Staff College, Jaji-Kaduna in the early 1980s, after an outstanding performance.

He honorably retired from the Ghana Armed Forces in 1983.

In all the appointments, he excelled as a leader with an unmatched sense of humour in defusing difficult situations! Subordinates felt very comfortable under his leadership and therefore gave their best.

“Sir, you have also by this event, exhibited your integrity to live by your word as an officer.”

“a nation which does not honour its heroes will not long endure,” Wg Cdr Mensah emphasized the importance of being fair and firm, disciplined and speaking truth to power without being rude. Recognition of merit is important for institutional development. He paid a tribute to former Chief of Air Staff, Air Cdre KK Pumpuni (Rtd) whom he called “my mentor.” He also complimented Her Ladyship Chief Justice Sophia Akuffo, Chairperson of the Board when he was the DG, Ghana Civil Aviation Authority.

Significantly, Wg Cdr Mensah stated that, he hopes the other Services, Army and Navy would do likewise, as I stated in previous writings as follows;

“Charity, it is said begins at home! The Air Force has set the pace! Knowing the Navy, they are coming slowly and steadily, but surely.

I guess the Army has already warmed up to give the first African UN Force Commander Gen Erskine a posthumous recognition soon, and also our second Force Commander of UNIFIL, Gen Seth Obeng who is very alive.

Once again, Ghanaians in positions of authority, please do not leave recognition to institutions only! Our heroes must be nationally recognized. That way, when the question “is Ghana worth dying for is asked?” an answer can readily be given!

Remember the saying, “give me the flowers while I can still smell them!”