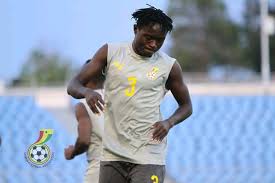 The defender was strongly linked with rivals Hearts of Oak with multiple reports suggesting a deal had been sealed after his time came to an end with the Porcupines in December 2022.

It was also reported that assistant Hearts of Oak coach, David Ocloo had championed Nettey’s move to the Phobians with the right-back set to start work with the 2020/2021 Ghana Premier League champions.

However, Great Olympics have shockingly secured the services of the player.

The 24-year-old has reunited with the ‘Oly Dade’ boys following the expiration of his contract with the Porcupine Warriors. He featured for Olympics in the 2017/18 season before joining Kotoko from Attram de Visser on a three-year deal.

Nettey was a prolific figure for Kotoko last season while playing 18 of their matches en route to a premier league triumph after the team had struggled for the title in eight years.

His brilliant performance earned him a call-up to the Black Stars under C.K Ackunnor in November 2020 where he featured for Ghana against Sudan in the 2021 AFCON qualifiers.

However, he struggled to impress Kotoko’s new head coach Seydou Zerbo with the Burkinabe opting for Augustine Agyapong.

Nettey is expected to help Yaw Preko’s men fight back into the top four after a poor run of results in recent times.

Great Olympics are now eighth on the league log with just a win in their last five matches. They will engage Karela United on Saturday in their next premier match.

Stakeholders worry about growing indiscipline in schools in Upper East