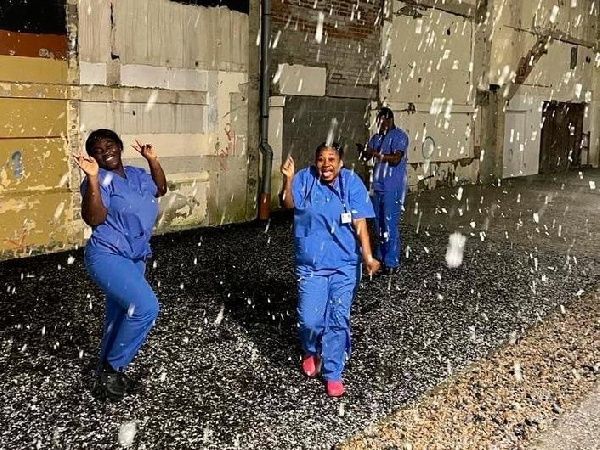 At the first opportunity, when these nurses, who work for Kingsbridge Private Hospital in Belfast, Northern Ireland, had the chance, they made their way to the streets, allowing the wintry flakes to fall on their faces.

According to the Belfast Telegraph, the moment the nurses – two women and one man – enjoyed this historic moment, was captured in photographs.

The photos have since delighted a lot of people on social media, the report added.

“Adwoa Aninkore, Richmond Koomson and Freda Dowaah had watched from inside the hospital as snow fell while they worked their rounds earlier in the day.

“During an evening break, they were delighted to see another shower and didn’t hesitate to dash outside,” the report stated.

Unable to hide her excitement, Adwoa, who was celebrating her 26th birthday on the same day, told the news portal that it made her feel like a baby.

“I felt like a child. Inside, I had that childlike feeling of joy.

“I was excited because I have only seen snow on the TV, and it was really, really nice to see it and feel it for real. I just wanted to soak the moment in.

“Where I live in Ghana, we have a rainy season and a dry season and here you have rain and a lot of cold and wind. You can get up in the morning and it is dry, and then in the afternoon it is raining. The weather here is a lot,” she is reported to have said.

The nurses are among 20 medical staff from across Africa who responded to an international recruitment campaign launched by Kingsbridge in 2021.

a curated journey with brands you love