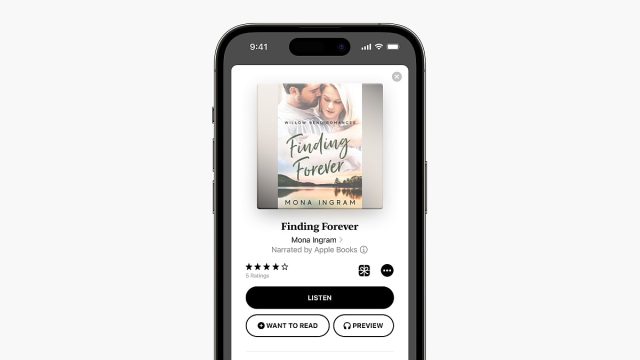 Apple Books, the company’s application that allows users to read Ebooks on their devices, has announced support for an AI-enabled feature to turn titles into audiobooks. The “digital narration” feature will make the production of audiobooks more accessible by reducing costs for publishers and authors, according to Apple. The company will use AI-enabled voice synthesis to read books and convert them into audio. The feature is currently available for English romance and fiction books and will later be rolled out to non-fiction genres.

The Cupertino company shared details of the new digital narration technology on its support page, stating that will make “the creation of audiobooks more accessible to all,” by reducing the production “cost and complexity” for authors and publishers. The tech giant says that the feature is currently available for romance and fiction books and the company is currently accepting Ebook submissions in those genres.

The digital narration feature will be available in two digital voices, Madison and Jackson. These voices will cover the romance and fiction genres, including literary, historical, and women’s fiction. Apple says the feature doesn’t currently support mysteries and thrillers, science fiction, and fantasy.

The company says it will also bring two more voice assistants, Helena and Mitchell, for nonfiction books. Notably, the service is only available in English at present.

Users can also search for AI narration in the Books app and will get a list of romance novels with “Narrated by Apple Books.” It also displays the specific name of the artificial narrator used i.e, Madison or Jackson that reads, “This is an Apple Books audiobook narrated by a digital voice based on a human narrator.” Additionally, the listing also includes free and paid audiobooks and artificial voices.

Apple says it has partnered with Draft2Digital and Ingram CoreSource for the production and distribution of converted audiobooks. However, it stated that publishers and authors will retain audiobook rights, and can put out other versions of the audiobook if they want. The app store will apply wholesale price limits and distribution of these audiobooks will be done via Apple Books and to public or academic libraries, according to the company.