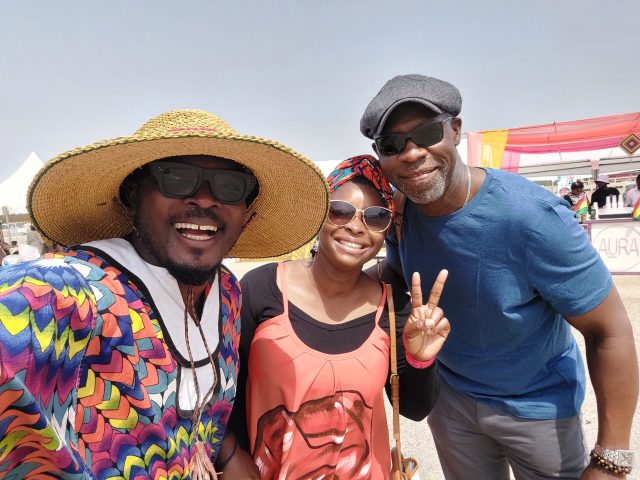 The Independence Arch towers high above the make-shift market created to house vendors at the third annual Taste of Ghana festival. The initiative – a portraiture of Ghanaian culture through the lenses of food, music, fashion, photography and cinema – creates opportunities for small and medium-scale businesses to audition for customers.

I had gone to the grounds earlier than expected. Most vendors were still unpacking their items ahead of the arrival of visitors. The huge speakers mounted directly in front of the arch, which was a venue for a previous concert and fashion show, were booming with high-life tunes. I soaked it in with a big smile upon my face…the tunes were classic from Amakye Dede, Rex Gyamfi through Daddy Lumba, Kojo Antwi, Ben Brako and more!

I cast my sight toward the back of the arch into the ocean, where some fishermen had anchored their canoes in search of fish. To the east of the arch is the Osu Castle, one time the seat of government, where President John Kufour became the last occupant, before heading to the Jubilee House.

A British-born Ghanaian woman in her mid-30s, in the company of friends, fixed her gaze on the castle. With her eyes stashed behind thick Gucci branded sunglasses while wearing big round earrings, she engaged the others in a conversation. Dressed in a T-shirt embossed with the image of ganja smoking Bob Marley, she pointed to the castle.

In her thick London accent, she asked one of the male friends with a round face and Gye Nyame arm tattoo about the history behind the Osu Castle and its historical relationship to Ghana. “I am not too sure about which Europeans lived here but Rawlings spent his entire presidency there,” he said.  I doubt the lady was impressed by that answer. Maybe she wanted more than the answer she got as she shrugged and moved on.

Still in the company of her friends, she walked to one of the vendors who had displayed colourful African wear made from batik tie and dye. She foraged through the clothes with her long painted nails.

In that same distinct accent, she ran a hard bargain until the vendor caved in. She picked three pieces, including a skirt which she wrapped around her waist and posed for a picture taken by one of her friends. A vendor of meat on skewers or khebab, a few yards away, was busy fanning the flame. As the aroma caught her nose, she went closer with friends to grab a charred sausage each. Beaming with smiles, they thinned away into the milling crowd.

It was my first time at the event, and I took the opportunity to run through the various vending spots to see what I was in a position to buy. I had made a commitment not to engage in impulse buying. But the smell of konkonte and groundnut soup, with ‘dry fish’ and some nicely sliced okro resting comfortably on the meal, nearly made me break that vow. The only thing I ended up taking was a chilled palmwine and a coffee book of Ghanaian waterfalls.

I had my two young children with me and they had a good time. I put them in a Mummy Truck ‘Arrow Glass’ which had been displayed as part of the event, and they both took turns to sit behind the wheel and pretend to be driving it. As a teenager in the early 1990s, I used to get free rides in a Mummy Truck to school, or even the market. The last time I saw one on the road was in Prampram. It had brought a group of football fans from Nungua to back their team in a local football match. I was enchanted by the sight of it. I took photos with my phone and later used the images to accompany an article I wrote about Ghana through the lenses of inscriptions.  Despite not being able to attend the nightly events at this festival, like the concerts and fashion shows, I enjoyed the time with family and friends.

In its third year, my hope is that the organisers will start thinking about the possibility of replicating it across the regions, to encourage both foreign and domestic tourists to see other interesting places in Ghana.  Until next year, I’ll be riding that Mummy Truck in my dreams to far away regions with sweet Tastes of Ghana on my palate.

Avatar: The Way of Water Is Now the Biggest Movie of 2022, Collecting Over...

Camidoh Unveils Tracklist For Forthcoming EP ‘A Lifetime Is Not Enough’