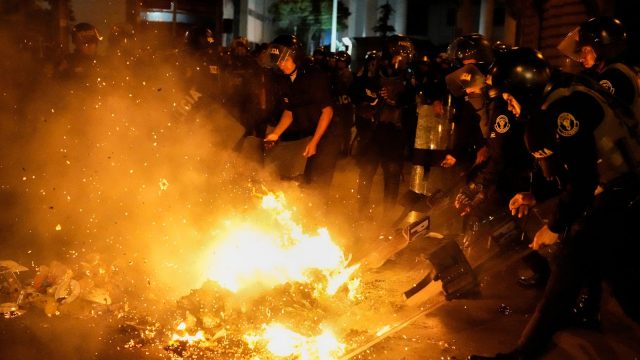 Thousands of protesters have clashed with police in Peru as violent demonstrations hit the country’s capital for the second day in a row.

Some protesters were seen throwing water bottles filled with rocks at police, while others were spotted waving flags and heard chanting: “The spilled blood will never be forgotten”.

Demonstrations have engulfed large portions of the country following the impeachment and imprisonment of Pedro Castillo, Peru’s first leader from a rural Andean background, after he tried to dissolve Congress last month.

The country’s former vice president Dina Boluarte was sworn in as leader, but since then protesters have held demonstrations, calling for early elections and for Mr Castillo to be released.

While the protests have been causing waves for several weeks, they have mainly been concentrated in the southern region of the country, with a total of 55 people killed and 700 injured in the unrest.

However, they’ve now started spilling into the capital, with objectors trying to make Lima the focal point of the action.

More than a 20-hour journey to join protest

On Friday, many of the protesters in Lima arrived from remote Andean regions, with one person saying he travelled for 20 hours from the southern Puno region, which has been the site of the deadliest state violence for the past month.

Jose Luis Ayma Cuentas, 29, said: “We’re staying until she resigns, until the dissolution of Congress, until there are new elections, otherwise we aren’t going anywhere.”

Anger at the police was a constant throughout the march, with demonstrators yelling “murderers” as they passed rows of officers wearing helmets and holding up shields.

Protests and clashes with police also took place in other parts of the country on the same day.

In Arequipa, Peru’s second city, officers clashed with protesters who tried to storm the airport.

Also in southern Peru, multinational firm Glencore decided to temporarily shut down its Antapaccay copper mine after protesters attacked the site.

In the evening, interior minister Vicente Romero praised police action during the protests, saying that it was “very professional”.

‘You want to generate chaos’

The demonstrations followed a defiant speech by Ms Boluarte on Thursday night, in which she accused protesters of fomenting violence and vowed to prosecute them.

“You want to break the rule of law, you want to generate chaos so that within that chaos and confusion you take power,” she said.

Ms Boluarte has said she supports a plan to hold fresh elections in 2024, two years ahead of schedule, but protesters says that is not fast enough.

As well as calling for Ms Boularte’s resignation, protesters are also demanding the closure of Congress and changes to the constitution.