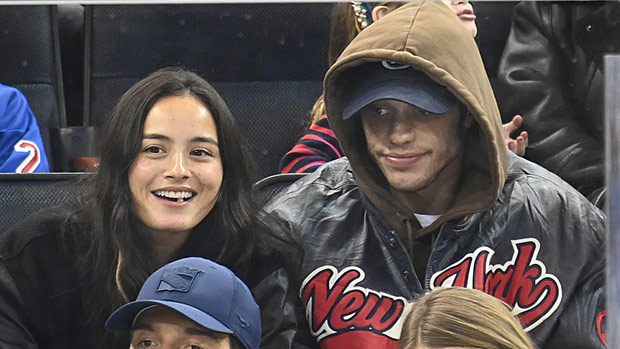 Pete Davidson, 29, and Chase Sui Wonders, 26, fueled more romance rumors with another outing together on Friday night. The comedian and actress, who co-starred in the horror-comedy Bodies Bodies Bodies, last year, were photographed hanging out on a side street near a black SUV in New York City, NY. They appeared relaxed and happy as they made their way around the area and didn’t pay much attention to the cameras following them.

Chase wore a black coat with a white and black patterned scarf as well as dark patterned pants and black heeled shoes. She had her hair down and carried a blue bag over one shoulder as she held her phone at one point. She also showed off pretty makeup as the wind blew her tresses around.

Pete and Chase’s latest outing comes just a few days after they were seen cuddling up near each other at a corner table in an NYC restaurant. They were also spotted enjoying a hockey game and outside his NYC apartment together in Dec. Although neither one of them have confirmed a relationship, it seems the two are spending as much time together as possible while also trying to keep it low-key.

It’s unclear how serious Pete’s connection to Chase is, but before their hangouts, he was seen with model Emily Ratajkowski. The two were photographed sitting courtside at a New York Knicks game in Nov. and other dates as rumors about a relationship gained momentum. Although a source told us they were getting “more serious” by mid Dec., it seemed the two parted ways before the end of the month and Pete had moved on by spending quality time with Chase.

Before Emily or Chase, however, the former Saturday Night Live cast member was involved in a nine-month romance with Kim Kardashian. The two met when she hosted the show and started dating almost immediately after. They gushed over each other in interviews and on Hulu’s The Kardashians and even attended the MET Gala together before calling it quits.

Gov’t Appointees to Contribute 30% of Salaries

It Is Me You’re Abusing When You Abuse Fishing Observers – Hawa Koomson |...